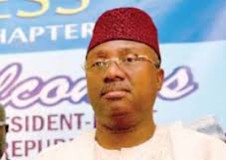 If Nigeria’s traditional institutions had been strengthened, major security challenges faced by country would have been prevented, the Adamawa State Governor, Mohammadu Bindow, has said.

Mr. Bindow, whose state is one of the three most plagued by the Boko Haram insurgency that has caused the death of over 15,000 people, stated this on Saturday in Yola when the Lamido Emirate Council paid him Sallah homage.

He said the country’s constitution is unfair to traditional institution for not assigning constitutional responsibilities to it.

According to the governor, constitutional recognition of the role of traditional institution will have prevented some of the security challenges and other social vices currently confronting the country.

He pledged that his administration would give due recognition to traditional institutions in the state.

“The neglect of traditional institution has caused us what we are passing through today.

“The institution is the closest contact with the people and they required to be given constitutional role.

“We in Adamawa will continue to recognise traditional institution.”

The governor announced that his administration had already purchased 30,000 metric tons of fertilisers to be distributed to farmers in all the 21 local government areas of the state.

“The fertilisers cost N3.5 billion even without transportation cost,” he said, adding that the gesture was aimed at boosting agricultural production.

Earlier, Barkindo Musdafa, the Lamido of Adamawa, who led the council, promised that the people of the emirate would support the administration to improve their standard of living.

Mr. Musdafa, who is also the Chairman, Adamawa State Traditional Rulers Council, said that the policies of the new administration would alleviate poverty and reduce youth restiveness in the state.