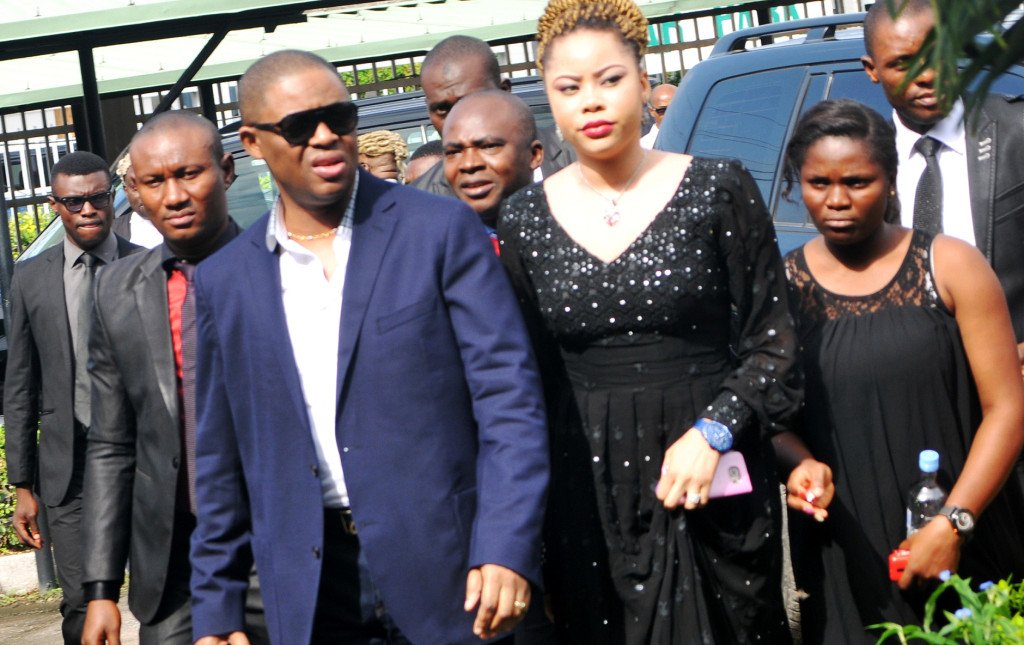 Former Director Of Media And Publicity, Goodluck Jonathan National Campaign Organisation, Mr Femi Fani-Kayode (3rd-L) And His Associates, Arriving The Premises Of The Federal High Court In Ikoyi, Lagos State, Where He Is Standing Trail In A Money Laundering Case Filed By The Efcc, On Wednesday

A former Minister of Aviation, Femi Fani-Kayode, who was acquitted and discharged of corruption charges Wednesday has announced a permanent change of surname to celebrate his victory in court.

In a moving press statement released after the court gave judgment, Mr. Fani-Kayode said he was dropping the surname he has borne all his life for another – Olukayode – in appreciation to God, who he said proved to the world he was innocent of the charges slammed on him.

“As a mark of honor and respect for the Lord and as an everlasting testimony of my love for and dedication to him, I wish to make it known to the Nigerian public that as from today my name will be changed,” the former minister said.

“As from this day, in honour of him and as a small tribute to my love for and total dependance on Him, that shall remain my family name. Once again, I give thanks to God for all that has happened to me and for this great deliverance. To him be all the glory.”

Press Statement by Chief Femi Fani-Kayode on the Occasion of his Victory at the Federal High Court on 1st July 2015.

Ladies and gentlemen, I am delighted, humbled and relieved by this verdict. In the last seven years, I have been subjected to the most malicious, vicious, sinister, well-orchestrated, insidious and devastating form of political persecution and wickedness.

The whole process almost destroyed my life, my family, my reputation, my health and my career. I thank God for his goodness, his mercy and for the fact that today, the whole nightmare has finally come to an end.

I give thanks to God for today’s verdict. It is the doing of the lord and it is marvelous in our sight. Once again, he has proved that he is faithful and true and that he always honors his word.

I wish to thank my family members, leaders of the Body of Christ, intercessors, pastors, political associates and friends who never doubted my innocence and who stood by me through thick and thin. I wish to thank my lawyers who worked so hard and so diligently over the last seven years throughout this case.

I wish to thank the Nigerian judiciary for dispensing justice in an honest and God-fearing way and for refusing to be intimidated by anyone or guided by anything other than the evidence presented before them in this case.

They dispensed justice with candor and fairness, and throughout the proceedings, they were fair to all, honest, courageous, professional and true.

I thank them for refusing to send an innocent man to jail and for refusing to allow themselves to be used as tools for personal and vindictive vendettas or political persecution.

This gruesome ordeal started seven years ago and throughout that period, it was grueling and difficult. They took seven years from me but they couldn’t break me or end my life.

It was a very difficult period for both me and my family which came with enormous and unimaginable challenges, yet from day one I never doubted that I would be vindicated because God had assured me of it and I know the God that I serve. He never lies and He never fails.

He said, through his Holy Spirit, that my innocence would speak for me and that he would fight this battle for me and he did. He said that he is the author and the finisher of my faith, my shield, my glory and the lifter of my head and he was.

He has proved all that throughout my life and he has proved it once again with the verdict in this case. To him alone be all the glory.

Again he honored his word because the whole nightmare started on 1st of July 2008 when I was arrested in the premises of the Nigerian Senate after the public hearing on the N19.5 billion Naira Aviation Intervention Fund.

I was cleared of any wrong doing in the administration of that fund by the Senate Commitee on Aviation yet despite that, immediately after the sitting before the Comimitee, I was abducted and arrested in an unceremonious and shameul fashion and locked up by the Farida Waziri-led EFCC for 10 days and charged to a magistrate court in Abuja.

Today, the 1st of July 2015, seven years to the day from that day when I was first arrested and first put into detention, I have been discharged and acquitted of all remaining charges by the courts.

The Lord has, once again, honored his word, to him alone be the glory.

As a mark of honour and respect for the Lord and as an everlasting testimony of my love for and dedication to him, I wish to make it known to the Nigerian public that as from today my name will be changed.

As from this day, in honor of him and as a small tribute to my love for and total dependance on Him, that shall remain my family name. Once again, I give thanks to God for all that has happened to me and for this great deliverance. To him be all the glory.

I swore that I would not leave the shores of Nigeria until this matter was finally brought to an end and the courts had pronounced my innocence. That was seven years ago.

I kept faith with that oath and it gives me pleasure to tell you that now that the whole ordeal is over I shall be leaving the shores of my beloved country for the first time in seven years for a short holiday and a long overdue medical examination.

They not only threw the whole book at me but also the entire kitchen sink but the Lord was with me. I stood on His words in Isaiah 50 v.7-9 and I never faltered or doubted Him even in the most difficult times.

Now they know that I serve a mighty God who never forsakes His own. I thank the media for their constant support and attention and I thank the millions of Nigerian people that chose to believe in me and to keep faith with me throughout this ordeal. Once again, I give thanks to the Lord. God bless you all.