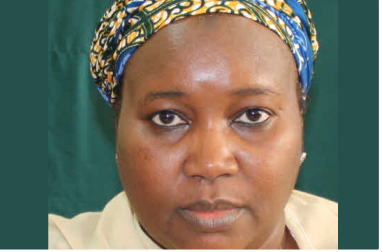 Haruna Imrana, the director of Communications for the Head of Civil Service of the Federation, publicly announced the appointment in a three-paragraph statement Tuesday night.

Mrs. Zakari is presently a National Electoral Commissioner at INEC.

According to her profile on INEC website, Mrs. Zakari, a pharmacist, hails from Jigawa State.

She attended Queens College Lagos and later graduated with a Bachelor of Science (B.sc) degree in Pharmacy in 1980 from the Ahmadu Bello University, Zaria. With a Second Class Upper degree, she was the best graduating student in her class.

After her National Youth Service, she worked as a pharmacist in various hospitals between 1983 and 1996.

She then moved into the consultancy field to serve in various capacities as a consultant in health and social services from 1997 up till her appointment as National Commissioner in INEC.

She was a Special Assistant to President Olusegun Obasanjo and was deployed to the Federal Capital Territory Administration where she, between 2004 and 2007, served as Secretary of Health, Human Services and Social Development, and later that of Agriculture and Rural Development.

Ms. Zakari is a member of the Pharmacist’s Society of Nigeria as well as that of the Nigeria Institute of Management (NIM).

Mr. Jega had before departing earlier on Tuesday handed over to another National Commissioner at the commission, Mohammed Wali.

Mr. Wali’s tenure as National Commissioner would expire on August 11, 2015.

Mr. Jega explained to the National Commissioners at the handing over ceremony that he wrote President Buhari reminding him that his tenure would expire on June 29.

Mr. Jega said he proposed to hand over to one of the National Commissioners whose tenures were yet to expire.

It was only hours after the INEC chairman’s departure that Mr. Buhari indicated his preference for Ms. Zakari.

Mr. Wali, who must have enjoyed the shortest tenure as INEC head ever, will now hand over to Ms. Zakari.

Mr. Jega had thanked Mr. Wali for accepting to act as Chairman of the Commission in spite of the short notice.

Mr. Jega gave him the following documents: handing over notes; detailed reports with appendixes; reports from the departments; three attachments on specific reports/projects being funded by the Ford Foundation and UNDP; financial statement; and up to date Statement of Account.

He said he was leaving gratified and thankful to God.

He thanked the National Commissioners for their camaraderie, teamwork and support.

Appointed in 2015 by former President Goodluck Jonathan for a statutory five year tenure, Mr. Jega is the only election management chief in the history of Nigeria to conduct two general elections in 2011 and 2015, credited as the most credible, free and fair polls in the annals of Nigeria.

Mr. Jega is a Professor of Political Science at the Bayero University, Kano State, where he served as Vice Chancellor. He was President of the Academic Staff Union of Universities, a period during which he first rose to national limelight.

Mr. Wali lauded Mr. Jega for raising the status of the Commission.

He said the six weeks during which he would serve would be critical as the Commissioners have to work together to sustain the momentum of the reforms initiated under Mr. Jega’s watch.

He expressed confidence that with the support of his colleagues, the Commission would be able to measure up.

He promised to host a befitting send-off party for Mr. Jega and the other National Commissioners whose tenures expired Tuesday.

But with the appointment of Ms. Zakari, his own tenure as INEC acting head, ended abruptly Tuesday night.

Fuel queues return to Abuja, as NNPC claims no cause for alarm