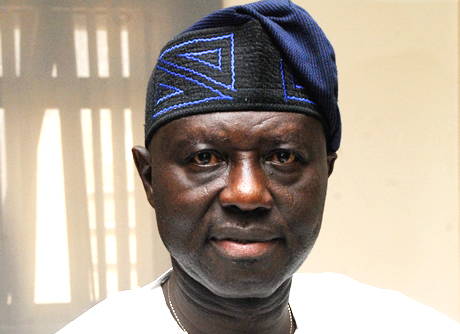 Contrary to the blatant denial of former Minister of State for Defence, Musiliu Obanikoro, and the Governor of Ekiti State, Ayo Fayose, that they were involved in a meeting where strategies for rigging the 2014 Ekiti State governorship election were discussed, the Minister of Police Affairs, Jelili Adesiyan, who was also at the meeting, has admitted that the meeting actually took place.

A recording of the meeting, which also featured other top officials of the government and Aliyu Momoh, a Brigadier General, was leaked last week.

Mr. Adesiyan, however, said the conversation in the leaked tape was an altercation between Mr. Fayose and Mr. Momoh after the former accused the later of being bribed by the then incumbent governor of the state, Kayode Fayemi.

“Fayose accused the General who supervised the Ekiti election of taking bribe from Fayemi and APC, that was two days before the election. They called me because they said the General disarmed policemen and I told him to allow the policemen to do their job,” he told the Sunday Punch newspaper.

“I was there, Fayose was there, Otunba Omisore was there, Senator Obanikoro was there. I am not denying that there was a conversation but it was not what they are saying.

“Nigerians are not dummies. These people are mischievous; somebody recorded the scene but let everybody listen to it. Listen to it yourself and get back to me.”

Mr. Obanikoro had denied that he was part of any meeting to rig the election.

“Whatever they are spreading within the social media, is something that APC made up. There is nowhere in the world you will find me talking about rigging an election anywhere in the country,” he said during an interview on Rhythm FM.

When the leaked audio was played back for him during the programme, Mr. Obanikoro replied that the recording showed someone was complaining about the plan of the APC to rig the election.

“The recording did not say I have manipulated any result from what I have listened to, rather, from what you have played is someone shouting at someone who is co-operating and collaborating with APC and trying to frustrate something.

“What that is, I don’t know, but from what I have heard, somebody shouting out loudly telling the other person that you are working with somebody else other than me, that’s what I could hear,” he said.

On his part, Mr. Fayose said his voice and that of other people in the recording was manipulated using speech software such as Natural Voices.

“Nigerians should be reminded of how the APC people lied in 2007 that they recorded how the governorship election was rigged even in the palace of the Ewi of Ado-Ekiti, Oba Rufus Adejugbe, but the party could not produce a single photo evidence at the tribunal because their plan to do what is known as Morphing and Synthesis was exposed.

“Nigerians should also be reminded of the existence of a technology called speech software, which is good at reproducing the sounds, inflections and intonations of a human voice. The APC that we all know is a party of crooks, who are capable of doing anything, no matter how criminal to achieve its aim,” a statement by his media aide, Idowu Adelusi, read.

Similarly, the police minister, Mr. Adesiyan, said the recording is another devious move by the All Progressive Congress, APC, to discredit the victory of Mr Fayose after their previous attempts failed.

“In order to set the record straight, we say emphatically that the offensive YouTube (audio) was unfounded and meant to hoodwink the unwary and portray the PDP and its leaders across the South West in a bad light.

“How did Omisore and those mentioned in the YouTube (audio) rig election when all the stakeholders in Ekiti voted for Fayose? Initially, the APC claimed it was stomach infrastructure that won the people’s mandate for Fayose. When that would not fly, they say it was photo-chromic rigging.

“Now, it is army and police who were coordinated to rig for Fayose, what balderdash!”