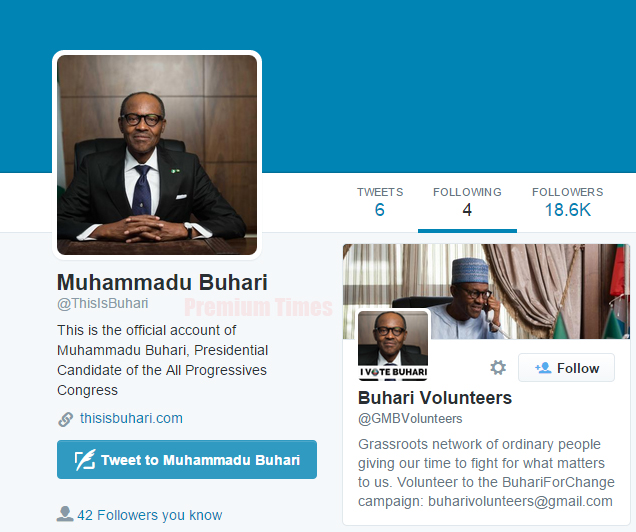 A few hours after the ruling Peoples’ Democratic Party, PDP, labelled him a “semi-literate jackboot”, the Presidential candidate of the All Progressives Congress [APC], Muhammadu Buhari, responded by officially joining social media.

On Monday, the 72-year old’s first post on Twitter around noon: “Good afternoon my friends! This will now be my official Twitter handle to communicate with you. – GMB” got over 1,000 retweets.

“I and my office will speak to you from here. Personal tweets will be signed GMB,” he said in another tweet.

Within six hours of enlisting, the Presidential candidate of the APC had garnered a followership of 12,000.

On Sunday, the Buhari Campaign Organization announced the formal opening of its media and communication office to provide “responsible” information to the public.

“While we congratulate the old media for the maturity and capacity displayed in integrating new media and technologies into their operations, experience has shown that the traditional skill of gate keeping, crucial to the production of credible and accurate information, has become a major challenge in the news dissemination service,” Dele Alake, Director of Media and Communication.

Mr. Alake said that the APC presidential candidate’s campaign would focus on issues of electricity generation and distribution, poverty elimination, eradication of corruption, mass employment and security of lives and property.

“These issues have no ethnic colour,” said Mr. Alake.

“Poverty afflicts the young. Unemployment has no political affiliation. Insecurity may be more prominent in the North East in the wake of the Boko Haram insurgency but the reality is that Nigerians have never been as endangered as they now are.”

Mr. Buhari and Yemi Osinbajo, a professor of Law, are the candidate and running mate respectively of the APC.

Mr. Alake said that Buhari-Osinbajo ticket is bringing together two institutions which would defend the national patrimony and maintain internal harmony.

“While the military defends the state from aggression, the judicial system defends the law which establishes and maintains the State,” said Mr. Alake.

“Indeed the intellecual, political and spiritual antecedents of Professor Yemi Osinbajo provides the complimentary combination and collaboration that the next Nigerian administration needs – a government that respects the rights of its citizens and enforces their duty to the State.”