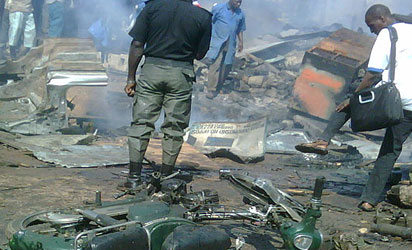 File Photo: An explosion in Kano in May 2012 ... Over 120 people were feared dead in that explosion

An explosion has gone off at one of the busiest locations in Kano, residents and security officials have told PREMIUM TIMES.

The blast occurred at a place known as “fillin parking” along Ibrahim Taiwo Way, a major intersection leading to the popular Kano Kantin Kwari Market.

Kantin Kwari textile market is rated the largest market in northern Nigeria, with several thousands of traders from all over Nigeria and neighbouring West African countries doing business there on daily basis.

Details of the incident as well as casualty rate are still sketchy at this time but the military is said to have raced  to the scene, condoning off the area.

The spokesperson of the Kano State Police Command, Magaji Majiya, confirmed the incident to the News Agency of Nigeria, but did not provide details.

The incident is coming less than two weeks after multiple explosions rocked the Kano Central Mosque, killing more than 100 people  and injuring hundreds of others.

An explosion had rocked the same market on December 12, 2012, injuring three people.

The state governor, Rabiu Kwankwaso, and other top political office holders are in Lagos for the national convention of the All Progressives Congress.

Governor Kwankwaso is seeking the presidential ticket of the party at the convention.