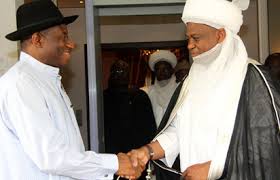 The Presidency on Monday said President Goodluck Jonathan was not using his office to pursue anti-Muslim agenda as being alleged in some quarters.

Reuben Abati, the Special Adviser to the President on Media and Publicity, said this on Monday in Abuja while speaking with State House correspondents.

The News Agency of Nigeria (NAN) reports that Mr. Abati was reacting to a number of allegations made by the Muslims Rights Concern (MURIC) through its Director, Prof. Ishaq Akintola against the president.

“Our attention has been drawn to a press statement issued by the Muslims Rights Concern and signed by its Director, Prof. Ishaq Akintola which made a number of allegations against President Jonathan.

“I find Akintola’s allegations rather curious and they can be dealt with as follows: first, he needs to be told that President Jonathan is not anti-Muslim as he alleges.

“Jonathan is the President of all Nigerians, whatever may be their beliefs’’.

“It is not true that the president is using the highest office in the country to promote Zion nation.’’

According to him, I think that is a most unfortunate statement coming from Akintola of MURIC and for which they owe President Jonathan an apology.

Mr. Abati also faulted allegation by the group that Muslims were marginalised in the recent national conference, describing it as a very unfortunate thing to say.

He noted that the national conference had been praised and adjudged one of the best of such conferences ever organised in the country.

“It was a purposeful conference, a conference in which a lot of maturity was displayed. Religion did not become a big issue in that conference.

“Rather, the conference became a platform for addressing many issues of general concern to various groups, ethnic or religious.

“MURIC cannot claim not to know that was a very successful conference,” he added.

Mr. Abati described as a blatant lie allegation by the group that the security system in the Presidential Villa was saturated with Israeli security operatives.

He emphasised that there were no Israeli security operatives saturating the security system in Aso Rock.

The president’s aide invited Mr. Akintola to visit the Presidential Villa to see whether it was Israelis that were in charge of security.

According to him, the security operatives in the Villa are not foreigners, they are Nigerians and there is no connection with Israel whatsoever.

“The symbol his statement is referring to is the Star of David. There is nowhere on that note as indicated in the specimen that has been widely publicised where there is any Jewish or Zionist symbol or the Star of David.

“The Star of David is a hexagram which is two triangles of equal lines superimposed on each other. The hexagram is a very popular symbol but it is not on that naira note.

“The symbol that he is referring to is not a Jewish symbol. It is what they call spark security feature.’’

He said, “It is an optical magnetic feature which enables the public to authenticate a currency note whether it is genuine or counterfeit. That is the function of that particular design.

“That design is not a hexagram and it is not in any way associated with Israel or Jewish or Zionism.

“It is two squares merged into one with a Manila briquette, which is a symbol of the cowry money used during the colonial era.

“It is an attempt on the part of MURIC to cause disaffection, because on the design of that note, the value of that note is written out in the three major languages in Nigeria, recognised in the constitution: Yoruba, Igbo and Hausa.’’

According to him, no attempt has been made to use this proposed naira note to discriminate against anybody, and the attack on President Jonathan is undeserved, unwarranted and totally unkind.

“I believe that MURIC will see the need to quickly apologise for misleading the public and for issuing that kind of statement that can cause disaffection against the president,’’ he said.