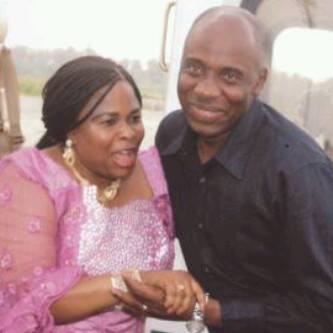 When the going was good

The Rivers State Governor, Chibuike Amaechi, has provided rare details of what he said was the actual reason behind his long-drawn row with First Lady, Patience Jonathan, saying Mrs. Jonathan had asked that state funds be corruptly shared with her.

Speaking Saturday, Mr. Amaechi said Mrs. Jonathan, an indigene of the state, became angry with him after he turned down the dubious demand.

The governor spoke in Port Harcourt at the joint graduation of the students of University of Ibadan and pioneer graduates of Ignatius Ajuru University of Education.

Recounting his role in stopping militancy in the state, the governor said the First Lady deliberately ensured militants, who had fled the state to Lagos, Ghana and Cote d’Ivoire, returned to fight him.

“I refused to give them money in Abuja because if I do that, I won’t be able to carry out any development project or finish the road from Rumuolumeni to Rumuepirikom.

“The quarrel between me and the wife of the President is because she said I should bring your money, Rivers people money and share with her,” he explained.

Mr. Amaechi called on the people of the state as well as members of the All Progressives Congress, APC, to ensure the Peoples Democratic Party, PDP, does not manipulate and rig the 2015 general elections.

Mr. Amaechi said if the PDP was allowed to rig the election and President Goodluck Jonathan, a member of the party, was voted back into office in 2015, poverty and underdevelopment would ruin the state.

“Now that you are graduates, you are now eligible voters that can use your voters’ card to change society,” he said.

“Ask yourselves this question that I have always asked Rivers people. What have we (Rivers people) done to President Jonathan that he has refused to bring any project to Rivers State. We had to fight them before they could do the East-West road.

“I had to abuse the federal government and they abused me back before they could do the work you now see on that road,” he said.

The governor alleged that Mr. Jonathan, who is from the South-South zone to which Rivers State belongs, had taken the state’s oil well from Soku to his (Jonathan) home state, Bayelsa State.

He also said 41 oil wells in Etche Local Council of the state was given to Abia State.

He asked, “Is the President or his wife from Abia State? Why do they want us to suffer? If President Jonathan comes back to power in 2015, Rivers State economy will crash.”

Mr. Amaechi lamented the consistent shortfall in oil revenue and the negative impact it had created to frustrate innocent Nigerians and urged the graduates to question the inconsistencies of the federal government in revenue sharing between it and the states.

“Graduates like you have the opportunity to ask the federal government to explain what they are doing with our money,” Mr. Amaechi advised.

“Since September this year, the federal government has not been able to pay any state from the federal allocation. They said they don’t have money. This is the first time that our president is emerging as the 6th richest person in Africa.”

He tasked the graduates to register as eligible voters ahead of the general elections.

Mr. Amaechi also blamed the failure of the Rumuolumeni Road construction project on the immediate past minister of state for education, Nyesom Wike, whom he described as incompetent.

He said the state government awarded N1.5 billion for the construction of internal roads in Rumulumeni and had already given the indigenous contractor, who is also from the area, N700 million.

“We said Rivers money for Rivers people because they don’t have capital. This man took the contract and gave it to a man who now wants to be governor.

“This man that is being backed by Mrs. Jonathan gave N250 million to the indigenous contractor and disappeared with N450 million without constructing the road. And this is the man who wants to be governor, with billboards screaming the concept of ‘New Vision’.

“What kind of vision is that for a thief? They have been thieves for too long so it cannot be new vision. The only thing that is new is that he has industrialized stealing. The former minister of state for education in a radio interview said, he ‘shedded tears’. Everyone knows there’s no word like that.”

Mrs. Jonathan’s media assistant, Ayo Adewuyi, could not be reached to respond to Mrs. Jonathan’s allegations. His mobile telephone is switched off the several times PREMIUM TIMES called.