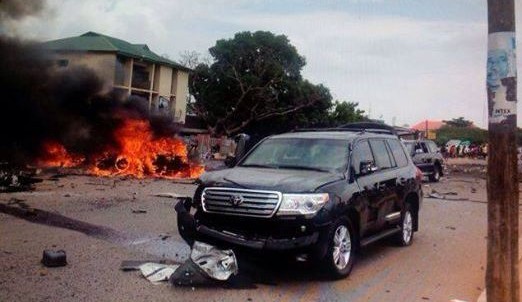 The retired general survived the attack

The convoy of a former Head of State, Muhammadu Buhari, was caught in the second explosion that rocked Kaduna on Wednesday, witnesses, his party, and close aides have said.

While Mr. Buhari escaped unhurt in the explosion that occurred at the busy Kawo market area of the city, three of his security aides were injured and rushed to hospital.

A close aide of Mr. Buhari said the bomber, who drove in a Toyota Sienna vehicle, rammed into the general’s convoy and detonated the explosive-laden vehicle.

He said the opposition leader survived the attack, but his vehicle, a Toyota Land Cruiser, and another one behind it were badly damaged.

“The General survived and he has already been evacuated in a Golf Volkswagen vehicle‎,” he said.

He also said Mr. Buhari’s damaged vehicle was towed away by emergency workers.

The spokesperson of Mr. Buhari’s All Progressive Congress, [APC], Lai Mohammed, said the explosion was targeted at the former head of state.

“Yes, his convoy was attacked,” Mr. Mohammed said in response to PREMIUM TIMES enquiry. “He narrowly escaped but some of his aides were hurt. The General is ok, but perhaps traumatised.”

A loyalist of Mr. Buhari, Rotimi Fashakin, said the former head of state was on his way to his home town – Daura in neighbouring Katsina state – when he was trailed by the bomber and attacked.

“I’m sure political Boko Haram are behind the attack,” Mr. Fashakin said. “General Buhari was the target of the attack.”

The leader of a pro-Buhari pressure group, The Buhari Vanguard, Jasper Azuatalam, said the former Nigerian leader was possibly attacked over his recent criticism of President Goodluck Jonathan.

“Recall that two days ago, Gen Muhammadu Buhari issued a statement warning President Jonathan and his government on their attempt to muscle the opposition and endanger Nigeria,” Mr. Azuatalam said. “The Presidency raised an eyebrow to the statement.”

The Kaduna state command of the Nigeria Police could not be reached to comment on the bombing involving Mr. Buhari.

The mobile telephone of the command’s spokesperson, Aminu Lawan, was switched off the numerous times this newspaper called.

The police had earlier put the death toll in the first explosion along Alkali road at 25.