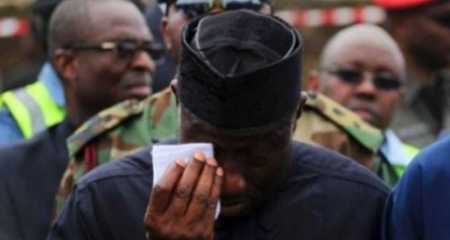 President Goodluck Jonathan in sad times. The priest spoke to audience in his electoral stronghold.

Levick was hired to help rev up the president’s plummeting public approval rating following what local and international observers consider his administration’s inept handling of the abduction of over 250 schoolgirls by the extremist Boko Haram sect.

The social media campaign, which trended on Twitter for most of Thursday, was triggered by a statement by the President’s Senior Special Assistant on Public Affairs, Doyin Okupe.

Mr. Okupe’s statement attacked the #BringBackOurGirls campaigners and blamed them for the refusal of parents of the abducted girls to meet with the president on Tuesday.

“Unfortunately, political forces within the Nigerian chapter of Bring Back Our Girls have decided to take this opportunity to play politics with the situation and the grief of the parents and the girls,” the statement said. “They should be ashamed of their actions.”

The statement also referred to the campaigners as engaging in  “psychological terrorism”.

Levick did not sign the statement, and it remains unclear how Nigerians concluded that the public relations firm was the unseen hands behind Mr. Okupe’s vituperation.

But before long, the social media was soon flooded with scathing messages directed at both the Nigerian government and Levick.

According to social media analytic site, Topsy, #someoneTellLEVICK, the hashtag generated for the campaign, was used more than 3,600 times as 6:30 p.m. on Thursday and it trended in the country.

Using that hashtag, a series of biting remarks were directed at the PR firm, which was recently hired by the Nigerian presidency for $1.2 million to help shape the administration’s messages concerning the Chibok girls abduction.

“#someoneTellLEVICK investors, go and sell your shares. You will have a PR company in need of world class PR by the time we are done!,” blogger Japheth Omojuwa tweeted.

“#someoneTellLEVICK they are contributing to poverty and violence in Nigeria and further jeopardizing the effort to #BringBackOurGirls,” opined Ayo Adegbulu via his handle @ayoadegbulu.

A former Minister of Education, Obiageli Ezekwesili, had condemned Mr Jonathan administration’s attempt to smear the image of the #BringBackOurGirls campaign through Levick.

Mrs. Ezekwesili, who is also one of the leaders of the campaign, tweeted through her handle, @obyezeks, that it was hateful of the presidency to hire the PR firm to help it tag Nigerians as terrorists.

“It’s to SUCH HATE? That our Presidency deployed our public resources to hire US firm @LEVICK to label INNOCENT CITIZENS “terrorists”??” she said.

President Jonathan approved Levick’s hiring in June to help the administration counter widespread criticism over its inept handling of the kidnap of the schoolgirls.

According to the contract papers, first made public by Washington-based newspaper, The Hill, the public relations firm is to help change “international and local media narrative” surrounding the Nigerian government’s efforts to rescue the girls, now in captivity for over three months.

Levick, which likes to describe itself as a leading strategic communications firm that establishes and protects trust, began work in late June, helping Mr. Jonathan plant an opinion article in the Washington Post through which the president assured the international community of his effort at rescuing the girls.

“My heart aches for the missing children and their families. I am a parent myself, and I know how awfully this must hurt. Nothing is more important to me than finding and rescuing our girls,” Mr. Jonathan wrote in the 504-word article.

The Federal Government has come under severe criticism from local and international media for its lethargic handling of the abduction, prompting the presidency and the ruling Peoples Democratic Party (PDP), to accuse the opposition of sponsoring a media campaign to discredit the government.

[FRIDAY SERMON] Benefiting From The Last 10 Days Of Ramadan, By Imam Murtada Gusau