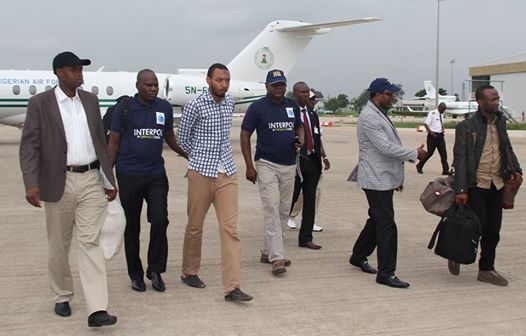 Aminu Ogwuche, the Nigerian accused of masterminding the April 14 bomb explosion in Nyanya, a suburb of Abuja, has been handed to Nigerian security officials by the International Police, INTERPOL.

This was disclosed by the Defence Headquarters on its twitter handle on Tuesday afternoon.

Mr. Ogwuche reportedly fled Nigeria immediately after the bomb blast that killed about 75 people, and was arrested about a month later in Sudan.

The Coordinator of the National Information Centre, Mike Omeri, had while addressing journalists on May 14 stated that Nigeria was making plans to have the accused terrorist extradited back to the country to face charges.

“We wish to authoritatively confirm the interception and consequent arrest of one of the two suspects on the wanted list, Aminu Sadiq Ogwuche who fled to Sudan.

“Mr. Ogwuche had been declared wanted by authorities in Nigeria for his involvement in the bombings of Nyanya. The efforts of Interpol, Nigeria police and the Department of State Services (DSS) have led to this arrest,” Mr. Omeri said.

On Tuesday, Mr. Omeri also confirmed that Mr. Ogwuche had been handed over to Nigerian authorities.