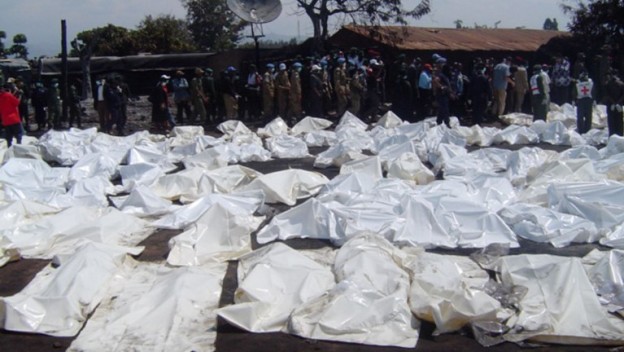 A graphic image circulating on Facebook and Twitter is said to show the badly charred bodies of 375 Christians murdered by Boko Haram militants in Nigeria. But the claim is false.

By Kate Wilkinson and Julian Rademeyer

The image is horrific. Dozens of charred corpses lie in rows in the sun. In the background near a ruined building with a rusting corrugated iron roof police, soldiers and medics – some of them wearing masks to hide the stench – stand around helplessly. A caption across the top of the photograph reads: “Boko Haram burns 375 Christians”.

The Nigerian militant group – which gained worldwide notoriety in April this year when it kidnapped over 200 schoolgirls – has been linked to hundreds of killings and dozens of atrocities and bombings since it launched a violent insurgency in 2009. Most recently the group has been implicated in attacks on villages in north-eastern Nigeria in which churches were torched and more than 40 people reported to have been killed. It has also been blamed for a car bomb explosion which claimed at least 56 lives.

That alone would seem to give the image some credence. But does it really show the aftermath of a massacre of 375 Christians? And where was it taken, and when? Could it be a fake?

A reader got in touch with Africa Check on Facebook, and asked it to investigate.

(Warning: Some of the links below contain graphic and disturbing images)

In 2012, the BBC found itself in hot water after it used a photograph supplied by an “activist” showing a massacre in Syria. The picture had actually been taken in March 2003 in Iraq.

In the Ukraine, amid a military offensive against pro-Russia militants, the fact-checking website StopFake.org has exposed a number of instances in which images have been manipulated or faked to show atrocities that never happened. One image, which was widely distributed on Facebook, showed the city of Donetsk burning.  It had been cleverly photoshopped.

Another far more gruesome photograph was distributed on a Russian news website. It purported to show a Ukrainian man eating the arm of a Russian. In fact, the arm was a movie prop and the man holding it was a prop maker involved in a 2008 film.

In Africa an image that was actually taken in the Central African Republic showing soldiers killing a man has been passed off on Twitter as evidence of  “a homosexual stoned by police” in Uganda.

A massacre, or an oil tanker explosion?

So how do you tell fact from fiction? Fortunately a number of online tools exist to help you spot fakes and hoaxes online. By uploading the image to Google’s image search function and sifting through the results we managed to narrow the hunt down. (Note: We have edited the Boko Haram “massacre” picture above to blur the corpses. The original image can be viewed here but – be warned – it is extremely disturbing.)

We quickly discovered that the picture was all too horribly genuine. But while it does depict a real event, it is not evidence of a massacre or, for that matter, the massacre of 375 Christians. Rather it shows the aftermath of a fuel tanker explosion nearly 2000 kilometres from Nigeria in the Democratic Republic of Congo.

The tragedy, which occurred exactly four years ago today, killed at least 230 people and injured 190. The fuel tanker apparently overturned while trying to overtake a bus. Bystanders were attempting to collect leaking fuel from the truck when the fuel ignited, possibly as the result of a lit cigarette. Many of the dead had gathered nearby to watch a World Cup soccer match.

Due to its graphic nature, the image of the charred corpses was not widely published but it did slip into circulation on the Internet.

To determine whether the purported Boko Haram massacre and the tanker explosion were one and the same incident, we examined television news footage and still images distributed by major news agencies.

Perhaps the most telling image was published on the Reuters website. It shows a row of bodies covered in blankets. In that image and the purported Boko Haram “massacre” image, the same distinctive building with the same discoloured corrugated iron roof and same window can be seen. The uniforms worn by the soldiers and the white Red Cross bibs worn by some of the emergency workers also match.

Just as the image has been used as “evidence” of atrocities committed by Muslims against Christians, it has also been used as “proof” of the slaughter of Muslims by Buddhist monks.

Various blog posts which appeared during a wave of religious violence in Myamnar claimed the image was evidence of “systematic violence” against Muslims. In fact, it has been so widely used in that context that Google suggests the  search phrase “Burma Muslim” if you upload the photograph to the search engine.

This investigation was done by our partner,  Africa Check, a non-partisan organisation which promotes accuracy in public debate and the media.We have its permission to republish.