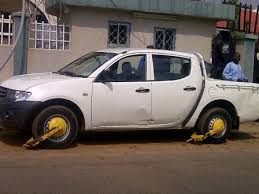 “Yes park and pay is coming back very soon and we are coming back with a better packaging”.

The Abuja administration has promised that the ‘Park and Pay’ policy that was declared illegal by a court, and subsequently stopped, will return in a better form.

A Federal Capital Territory, FCT, High Court in Apo, Abuja had on April 14 declared the park and pay policy illegal, saying it should be stopped forthwith.

Justice Peter Affren had ruled there was no enabling law backing the policy after a private savings and loans firm in the Nigerian capital city sued the Abuja administration.

Prior to the court ruling, the Abuja administration had, using four private firms, collected fees from vehicle owners as parking charges within the city centre. The firms also clamped vehicles that were ‘indiscriminately’ parked and forced the owners to pay as much as N25,000 to get their cars back.

PEMIUM TIMES had reported how residents of the Nigerian capital complained about the policy, accusing the collectors of extortion. The residents largely celebrated the ban on the policy.

However, the FCT administration has now said it plans to fulfil the legal requirements needed to reintroduce the policy.

Speaking to PREMIUM TIMES, the Special Adviser on Media to the FCT Minister, Nosike Ogbuenyi, said the Park and Pay policy would be repackaged.

“We are going to have a repackage of Park and Pay system from what it used to be. As we speak now, our legal department is finalizing work on the proposed bylaw that will give it the legality it requires,” Mr. Ogbuenyi said.

He said the Abuja residents abhorred the Park and Pay scheme because vendors were hostile as the various organisations that ran the scheme underpaid them.

“The ministry is looking into the issue of making sure that the operators of the system treat their employees well in terms of salary to ensure that the salary they pay is well above the National minimum wage level,” he said. “We discovered that why some of them behave the way they behave to car owners is because the pay they receive at the end of the month is little.”

“This time around we want it to also come from a human angle where by the vendors will be treated well so they can be happy doing their jobs,” he said.

The Special Adviser said only competent operators will operate the Park and Pay system in its second coming.

“We are also doing an entire process of procuring the operators, making sure that only those that are technically competent will be allowed to operate the system.

“The park and pay system in Nigeria is very necessary in our system because we need to protect infrastructure and to remove negligence on the road. We are getting experienced hands this time around”, Mr. Ogbuenyi said.

To ensure a wide acceptability for the revised policy, the Administration plans to make some fundamental changes, including reviewing the parking charges.

“The issue of fee is also being reviewed,” Mr. Ogbuenyi said. “We are also looking at the timing because we discovered that in Nigeria we can’t do something meaningful within 30 minutes. For instance, when you go to banks for one transactions or the other, you spend at least an hour because of the queue.”

“More so motorist were also complaining about the fee, they were opting for the least amount which was leading to friction. Now there is a recommendation that the minimum time should be one hour instead of 30 minutes so that motorist will not have to buy any ticket or have their cars towed within an hour,” he added.

The spokesperson said the ministry has learnt lessons from its first attempt at the policy.

“We have learnt a lot from the complaints and the various mistakes we made,” he said. “You know before we just started without putting a whole lot of things in place since nobody has done it before in Nigeria. Now we are making sure we fine-tune the whole system.”