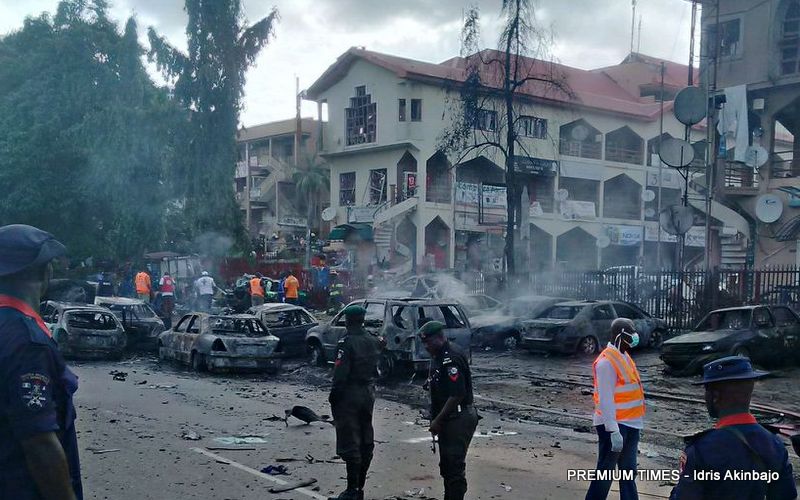 Since the installation of the CCTV cameras, criminal have launched violent attacks on Abuja without being detected.

The failure of the National Public Security Communication System, NPSCS; otherwise known as the CCTV project, has heightened the level of insecurity in the Nigerian capital, Abuja, PREMIUM TIMES checks have revealed.

The project which was initiated by late President Umaru Yar’Adua, was conceived to help security agencies in the Federal Capital Territory check the growing insecurity in the federal capital.

But since the installation of the CCTV cameras and allied equipment, criminals and insurgents have over and over again launched violent attacks on the city without being detected.

Between 2010 when the project was initiated and now, Abuja has come under seven deadly attacks, leaving scores of people dead and properties worth billions of naira destroyed.

The first bomb explosion in the city occurred on 1st October, 2010, a few meters from the Three Arms Zone, during the country’s 50th Independence Day Anniversary celebrations.

Three Arms Zone is home to the Presidential Villa, the National Assembly Complex and the Supreme Court of Nigeria.

The Movement for the Emancipation of the Niger Delta, MEND claimed responsibility for the twin car bombs which killed 10 and injured many more.

On June 16, 2011, a suicide bomber drove a bomb-laden car and rammed into the parking lot of the Police headquarters, shortly after the convoy of the then Inspector-General of Police, Hafiz Ringim, entered the complex.

Two persons died, including the traffic warden who prevented the bomber from ramming the bomb-laden vehicle into the main building, while several cars at the parking were burnt.

On August 26, 2011, another suicide bomber rammed a bomb-laden car into the United Nations building along the Diplomatic Drive in Abuja, killing about 20 persons.

Another suicide bomber, on April 26, 2012, attacked the Abuja office of the Thisday Newspaper, ripping off the roof of the building and killing innocent staff.

Barely two weeks after the April 14 attack, another one occurred opposite the same Nyanya Motor Park on May 1, killing nine and injuring scores of persons.

On Wednesday, June 24, another bomb went off at Emab Plaza, a busy shopping plaza in the heart of the capital, killing 21 persons.

In all the attacks, the CCTV cameras installed across the city could not pick up images of the perpetrators of the dastardly acts.

PREMIUM TIMES has learnt that some of the CCTV cameras installed around the capital city are mere toys, ostensibly fixed to deceive the public.

Top officers at the Force Headquarters, who pleaded not to be quoted because they were not authorized to speak on the matter, said while some of the cameras were functional, several others, were dormant, making the task of policing the city a difficult and sometimes impossible one.

It was also found that most of the crimes in the city are committed outside the CCTV coverage area as most of the functional cameras are concentrated within the Three Arms Zone and some parts of the Business District.

One of our sources said, “The truth is that the CCTV cameras in Abuja are not helping us much in tackling insecurity in the city. It is like taking an inadequate dosage of a drug when you have a major health challenge.

“That is the same situation we have with the CCTV cameras installed here in Abuja. Some of the cameras are working but a lot more are not working thereby creating many dark spots in the city.

“The camera is not helping much because most of the crimes occur in some of the dark spots. If a crime is committed in some of the coverage areas, it will be possible to detect them with the cameras.”

Another official revealed that the NPSCS project has been a subject of hire-wired intrigue and corruption by top officials of the Police Affairs Ministry and the Presidency.

“The contract was awarded and paid for, long before the present IGP came on board but a lot of people are trying to rope him into the problem when they know those who were responsible for the failed project,” he said.

PREMIUM TIMES learnt that the NPSCS project was initiated to help Nigeria tackle the increasing level of insecurity in the country as far back as 2010.

Investigation showed that late President Umaru Yar’Adua was persuaded by some of his powerful aides to award the $470 million project to the Chinese firm, ZTE Corporation, in August 2010 without carrying out due diligence on the company.

The project, which was funded through a $600 million credit facility obtained from the Chinese EXIMBANK, was slated for completion in May, 2011.

Part of the project consisted of the installation of Close Circuit Television Cameras, CCTV, in many parts of the Federal Capital Territory, FCT.

The NPSCS project is based on the Global Open Trunking Architecture (GoTa), a new technology that provides strategic telecommunications solutions to targeted clientele.

Olusegun Aganga, the then Minister of Finance, led the Federal Government’s delegation to Beijing where the loan agreement for the project was signed with the Chinese EXIMBANK in June 2010.

Former Minister of Police Affairs, Adamu Waziri and the then Inspector-General of Police, Halfiz Ringim, were also part of the delegation.

The $600 million financing portfolio for the project was secured as a soft credit loan with three percent interest repayable in 10 years after an initial 10 years of grace.

The project was expected to create a dedicated trunk system for inter-agency communications and linkages as well as remove critical national security agencies from private network operators and service providers.

Late Mr. Yar’Adua had during a visit to China on March 1, 2008, made a brief stop at Shanghai where he held talks with top executives of ZTE Researching and Development Centre.

The outcome of the discussion culminated in the signing of a Memorandum of Understanding (MoU) between the Federal Government of Nigeria and ZTE Corporation.

The government, PREMIUM TIMES learnt, made a down payment of $70, 500,000 which is 15 percent of the total contract sum and signed a Sovereign Guarantee to the tune of $399, 500, 000 to enable ZTE source the loan from the Chinese Government.

However, the project was piloted with the installation of solar-powered security cameras and allied security infrastructure in many parts of Abuja.

But PREMIUM TIMES has learnt that some of the materials deployed for the critical national security infrastructure are of low quality compared to what those used in China. Yet Nigerian authorities are not known to have lifted a finger in protest.

This newspaper also learnt that the contract was signed and executed in secrecy based on the Memorandum of Understanding, MoU, signed between the Nigerian government and the Chinese firm.

Article 4 of MoU specifically indicated that the terms agreed upon by the parties be kept secret.

The secrecy clause in the MoU, PREMIUM TIMES gathered, was created to allow top officials of the Police Affairs Ministry and the presidency to negotiate away some of the critical elements of the project.

The source at the Presidency further confided in PREMIUM TIMES that the secrecy clause violated every rule of transparency and accountability and should not have been allowed in the MoU.

When contacted, the Force Public Relations Officer, Frank Mba, told PREMIUM TIMES he was not competent to speak on the NPSCS contract.

The Chief Press Secretary at the Police Affairs Ministry, James Odaudu, told PREMIUM TIMES the CCTV project is a sensitive national security operation that should not be discussed publicly.

When further pressed for comments, he said, “It is not possible that the whole of Abuja can be covered in one phase of the project. It is an ongoing project with a lot of rooms for expansion.

“If there are challenges, we will sort them out with time. There are no projects without challenges.”

Mr. Aganga, the then Finance Minister, now Minter of Trade and Investment would not speak to PREMIUM TIMES or reply to an email sent to him on the matter.

When PREMIUM TIMES visited ZTE Corporation Nigeria at No. 5 Dep Street, Maitama, Abuja to speak with its officials on the matter, a security man at the gates said visitors are not allowed into the premises unless on invitation.

Attempts to convince the private security staff on the need to alert top officials of the company on the presence of our staff, also failed.

An email to the corporate headquarters of the company in China was not also replied, weeks after it was sent.

TRIBUTE: Sulaiman Bisalla: An Exceptional Journalist And Man of Peace, By Imam Imam