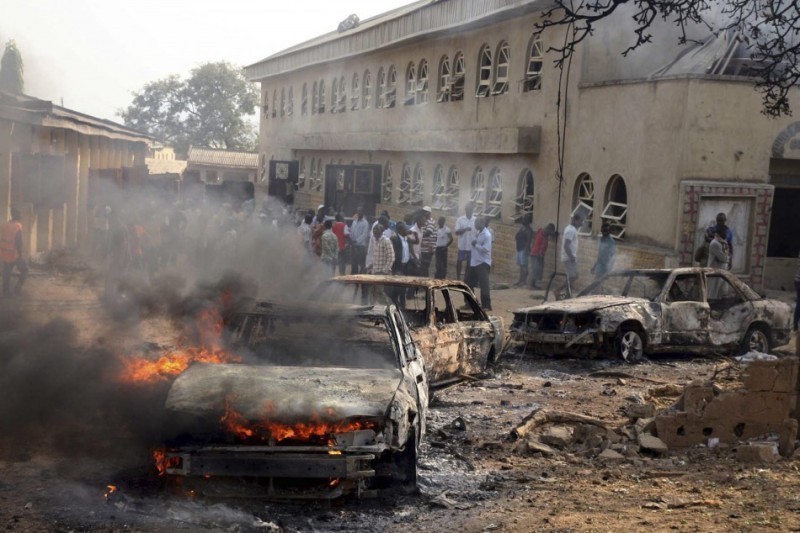 “The private sector is also putting N1.6 billion. Gordon Brown is going to be raising some resources and the governors are also putting in commitment.”

President Goodluck Jonathan on Tuesday kicked off the Safe School Initiative with an initial N3.2 billion from the Federal Government and the organised Private Sector, to ensure a safer school environment for Nigerian children.

The initiative is aimed at making schools safer for children across Nigeria and ensuring that the about 10.5 million out of school Nigerian children are returned to school.

The initiative was launched in the presence of the former British Prime Minister, Gordon Brown, who is the Special Representatives of the United Nations Secretary General, Ban Kin Moon; as well as Governors Kashim Shettima of Borno and Ibrahim Geidam of Yobe.

It was held at the Presidential Villa in Abuja.

While it is meant for the whole country, the Safe Schools Initiative starts off in Borno, Yobe and Adamawa states, the states under emergency rule and which have been most affected by the Boko Haram insurgency.

Mr. Brown had, during the World Economic Forum in May, pledged $10 million to help match investment by the federal government to ensure security in schools.

The Minister of Finance and the Coordinating Minister of the Economy, Ngozi Okonjo-Iweala, while addressing journalists at the Presidential Villa after the commencement of the initiative said the flag off marked the beginning of a solid commitment to creating a more conducive atmosphere for the education of Nigerian children.

“We met with the President who has kicked off the safe school initiative. And Brown, former UK’s Prime minister is here, the envoy of the Secretary General of United Nations, bringing the wishes and support of the intentional community to back Mr. President’s initiative on safe schools.

“We have got the Excellencies, the governors of Borno and Yobe states and we will be joined by the governor of Adamawa state tomorrow, who are going to be working with us to make the communities safe and the schools safer so that our children who are in this areas can come back to school,” she said.

Mrs. Okonjo-Iweala said the president kicked off the initiative and asked her to open a trust fund “which we have already put N1.6 billion.”

“The private sector is also putting N1.6 billion. Gordon Brown is going to be raising some resources and the governors are also putting in commitment.

“We are intent on trying to make sure that our children in the states have an environment which they can come back to school and not have their education truncated,” she said.

Explaining the initiative, Mr. Brown noted that every child is special and unique. He said he came with the best wishes of the international community which is also supporting the project aimed at making schools safer for children in Nigeria.

“I have come here with the UN Secretary General Ban Ki-Moon giving me his support to do so; to send our sympathies and our solidarity and our support to the children of Chibok who have been cruelly kidnapped and abducted and to give our support to the families of these girls and to the whole communities in Borno State.

“And I am here to say that we wish as an international community to do everything we can to back up the efforts of the President, Goodluck Jonathan, and the governors of the states to make sure these girls are returned to their families and at the same time to make sure that every parent feels that they can send their children to school knowing they will be safe in future.

“And that is why we are launching the safe schools initiative and that is why the President has decided to set up this fund that will allow the international community as well as local donors to contribute to making our schools in this country safer.”

Mr. Brown explained that though the programme is for the whole country, it is starting in the states “which have the greatest problem with terrorism over recent months.”

“It is our determination as an international community to help the families feel secure about their boys and girls going to school with the hope that they will be safe.

The Former British Prime Minister noted that the initiative was focused on helping to rebuild the “Chibok schools because we want parents of that area to be sure that when their girls are released, they can come home to a school that is rebuilt and safe.

“And we want to help in rebuilding the schools in other areas where schools have either been demolished or burnt down or vandalized. And we want over the long run to help Nigeria which is a great country with a great future and wonderful potentials to enable it so that the ten and half million boys and girls who don’t go to school today are able to go to school.”

He assured that there was massive support around Europe, Asia, America and Latin America for Nigeria “in this hour of difficulty facing terrorism and also in its ambition to be such a great country with great educational standards.”

Also speaking to journalists, the Governor of Yobe State noted that the initiative was going to be started in the three states because “we are the most affected areas in terms of the insurgency.”

“We promise to give him all the necessary cooperation to ensure that the programme succeeds.

“We are also going to partner both with him (Mr. Brown) and the federal government under the leadership of President Goodluck Jonathan to ensure that this programme becomes successful at the end of the day,” he said.

The Borno State governor also assured that the state government would partner and cooperate with the federal government and the international community to ensure that the problem facing the zone is promptly addressed.

“It is an issue that basically boils down to education, poverty, (and) empowerment. By the grace of God, we want to give you our commitment that we are going to pursue this thing vigorously with all the resources human and materials in our disposal and please it will be completely devoid of politics.

“Times like this call for sobriety, maturity, for unity of purpose. At the appropriate time, we are going to play politics but this is not time for playing politics with the lives of people,” he said.