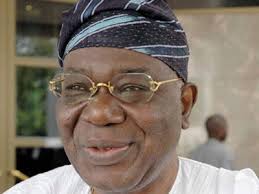 “We must realise that our new position as the leading economy in Africa places some heavy responsibilities on the country.”

A former Head of State, Ernest Shonekan, on Tuesday said sea piracy and armed robbery were responsible for the underdevelopment of the nation’s maritime industry.

Mr. Shonekan, who said this at the opening of the 13th Maritime Seminar for Judges in Abuja, added that the unwholesome activities were giving the nation bad name in the international community.

The former head of state, who is the Chairman of the three-day seminar, said that the negative activities in the industry were affecting the nation’s economy.

“Nigeria needs to collaborate with other African countries like Sao Tome and Principe, Benin Republic, Congo, Angola, Mozambique and the land-locked countries to tackle critical issues in the maritime industry,’’ he said.

The former head of state said the nations should also be able to adopt common policies.

“We must realise that our new position as the leading economy in Africa places some heavy responsibilities on the country,” Mr. Shonekan said.

“Apart from global trade, more oil and gas exploration and production activities are done on the seas now than before.

“Bigger vessels are being deployed to cope with the need to move raw materials and finished goods across the seas,” Mr. Shonekan said.

He said that globalisation, technology, and Internet had revolutionised economic activities across the world, pointing out that this had resulted to higher volume of trade among countries.

Mr. Shonekan said this had also resulted to complexities of trade among countries and trading partners across the world.

The former head of state stressed the need for legal interpretation of many provisions of the Admiralty Law.

He said Nigeria was the leading oil producer in Africa, adding that 90 per cent of the nation’s foreign earnings was from the oil and gas sector.

He said with the rapid growth of the nation’s oil and gas sector, much of the oil and gas production over the years shifted to the deep sea blocks where the nation had huge reserves.

Mr. Shonekan said increased activities in the deep sea blocks also had their legal implications.
He said this had made the maritime seminar, which focused on maritime sector, very relevant to operators in the industry. He said the seminar would also focus on sea piracy, maritime boundaries, charter parties, lay time and demurrage.

He said participants would also do an overview of section 20 of the Admiralty Jurisdiction of the Federal High Court.

He listed others areas of focus as liability of terminal operators and marine insurance in relation to oil and gas.

Mr. Shonekan, however, said there was need for quick dispensation of justice on issues affecting the maritime industry. He said this was important because of the dynamics of the maritime environment.

He urged key operators and other stakeholders in the industry to brace up and update themselves on the new ideas, information and technologies that were emerging.

The former head of state, however, urged stakeholders to also adapt to the changes, while legal aspects were handled by the judicial system.

The theme of the seminar, jointly organised by the Nigerian Shippers’ Council, NSC, and the National Judicial Institute, NJI, is “sustainable development in the maritime sector’’.