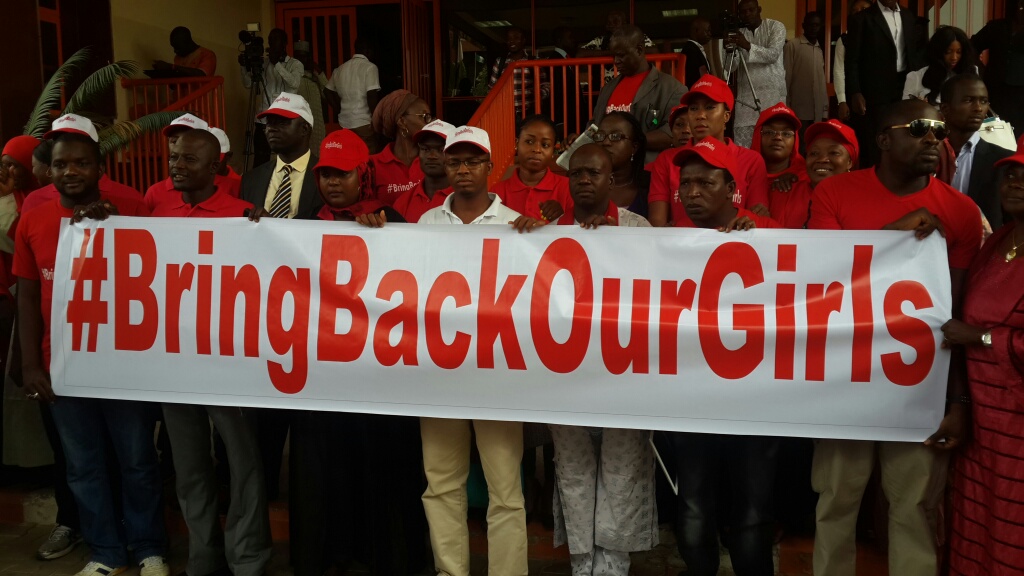 The #BringBackOurGirls protesters had filed a suit demanding N200 million as damages from the police commissioner.

Less than 24 hours after the Abuja Commissioner of Police, Joseph Mbu, announced a ban on all rallies relating to the kidnapped Chibok girls, and a few minutes after protesters filed a N200 million suit against him, the Nigeria Police reversed the ban.

Mr. Mbu had while addressing a press conference on Monday said “Protests on the Chibok girls are hereby banned with immediate effect.”

However, a statement on Tuesday by the Force Public Relations Officer, Frank Mba, faulted Mr. Mbu’s statement.
“The Police High Command wishes to inform the general public that the Force has not issued any order banning peaceful assemblies/protests anywhere in Nigeria,” Mr. Mba said.

Mr. Mbu had on Monday said the ban was placed to deter dangerous persons from infiltrating the peaceful #BringBackOurGirls protest that has been going on daily in the Nigerian capital for about a month.

“Information reaching us is that too soon, dangerous elements will join groups under the guise of protest and detonate explosives aimed at embarrassing the government,’’ he had said. “As the FCT police boss, I cannot fold my hands and watch this lawlessness.”

Mr. Mba, however, said what the police issued was only an advisory.

“It (the police hierarchy) notes however that against the backdrop of current security challenges in the country, coupled with a recent intelligence report of a likely infiltration and hijack of otherwise innocuous and peaceful protests by some criminal elements having links with insurgents, the Police only issued advisory notice, enjoining citizens to apply caution in the said rallies, particularly in the Federal Capital Territory and its environs,” he said.

A few hours before the police hierarchy distanced itself from the Abuja police chief, the #BringBackOurGirls protesters had challenged Mr. Mbu’s directive in court.

The protesters filed a suit in the Federal High Court, Maitama, Abuja, against the Nigeria Police seeking N200 million in damages for banning protests in the Nigerian capital.

The protest co-coordinator, Hadiza Bala-Usman, filed the suit on behalf of the protesters, who were represented by their counsel, Femi Falana.
The group asked the court to declare the ban as illegal and unlawful.

Ms. Usman said that the Nigerian police violated the Nigerian Constitution by banning the protest and demanded that the “court restrains the Nigerian Police force from implementing this illegal ban.”

“We have drawn the attention of the fact that section 38, 39 and 40 are been violated by this ban our activities ,we are hoping to get an injunction against the police force from implementing this illegal act,” she said.

She said the protesters would not be intimidated and will continue protesting since there is a law protecting their rights to do so.
“We know our rights and we shall not be intimidated by anyone we are mindful of the fact that this is contained in our constitution we shall continue with our protest while at the same time we have filled our suit in the FCT high court,” she said.

Another protester and the Secretary General of the Women’s Right Advancement and Protection Alternative, WRAPA, Saudatu Mahdi, told journalists that what they asking for is the upholding of their “fundamental Human Rights, freedom of consciences, freedom of expression and freedom of assembly as well as right to associate as guaranteed by section 38 39 and 40 of the constitution of the Federal republic of Nigeria”.

“We are also asking for declaration that the decision to ban protest and rallies relating to the Chibok girls is illegal unconstitutional and violates the fundamental rights in our constitution.”

The protesters asked the court to declare that Mr. Mbu is not competent to ban protests or rallies in city.

“We are asking for an order of perceptual injunction restraining him or his agents from further preventing us aggrieved Nigerians from taking part in any protest in exercise as the freedom of conscience extraction assembly. We are also asking for an order directing the respondent to pay to us the sum of N200 million as damages for the said act of violation,” Ms. Mahdi said.

After the protesters filled their suit, they proceeded from the Federal High Court to the National Human Rights Commission, NHRC, carrying placards with inscriptions ‘bring back our girls’. They also chanted solidarity songs with the same message.

At the NHRC, the Director of Human Rights Institute, Oti Ovrawah, addressed the protesters and assured them of redress.

It was while the protesters were at the NHRC, that Mr. Mba released his statement.

Mr. Mba said the police only issued an advisory notice asking citizens to apply caution in the protests especially in Abuja because they had information they had intelligence report of a possible infiltration by criminal elements.

Ms. Usman, reacting to the Mr. Mba’s statement, told PREMIUM TIMES that it is ironic and ridiculous that in Nigeria, the Inspector General of Police says a different thing and the Commissioner of Police says another.

“It is important for us to note that these are within the Nigerian Police Force. We have the Inspector General of Police saying a different thing and the Commissioner of Police saying another thing. We appreciate that the IG office has realized that we are protected under the Nigerian Constitution section 38, 39 and 40 which allows us to engage in peaceful processions.”

Mr. Falana, a Senior Advocate of Nigeria, SAN, and counsel to the #BringBackOurGirls protesters, condemned the ban as announced by Mr. Mbu and called on the government to prosecute him for violating the constitution.

“I have made it clear to the police authority that because they have allowed Mr. Joseph Mbu to get away with a lot of illegalities in Rivers; he has now come to Abuja believing that he can continue with it.

“What Mbu did yesterday is not only illegal but contemptuous and therefore a criminal offence. We are also laying a complaint towards the Attorney General of the Federation to have Mbu prosecuted for violating the order from the Court of Appeal,” Mr. Falana said.