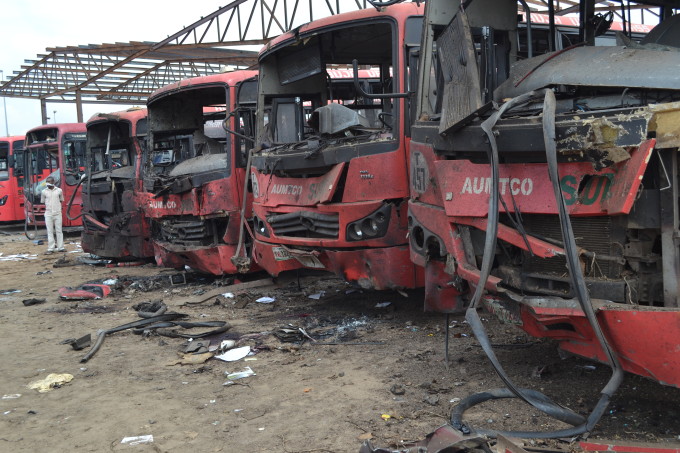 A young man  in his mid 20s, who confessed being a bomb expert for the extremist Boko Haram sect has been arrested  by military operatives in Borno state while on his way to  Sambisa forest, the dreaded hideout of the Boko Haram terrorists, reliable high-ranking military sources have told PREMIUM TIMES.

The man, whose identity is being concealed by the authorities, appears a big catch for the military as he has confessed being involved in the recent Nyanya and Jos bombings that killed more than 300 people.

The man, who was traveling from Abuja to Sambisa was arrested on Sunday near Bama town of Borno state by soldiers of the 7 Division of the Nigerian Army.

Our sources said soldiers on patrol nabbed the man during a stop-and-search operation at a checkpoint after finding suspicious items like “sophisticated communication gadgets, a map, a very  expensive laptop and 30 pieces of Flash-Drives in  his bag”.

The soldiers, our sources said, immediately whisked him to the Maimalari barracks in Maiduguri, a distance of about 100km away and handed him over to relevant military personnel for further interrogation.

During interrogation, the man reportedly confessed being  a bomb expert working for Boko Haram and claimed to be carrying out assignments for “the power that be”

The suspect also confessed being responsible for both Nyanya and Jos bomb blasts that claimed about 300 lives.

“He said he was to meet with some operatives of  Boko Haram for yet another work (bomb attack)”, said one of our sources who cannot be named because he was not authorised to make these disclosures to anyone.

The source added that the suspect boasted during interrogation that those who arrested him merely wasted their time as he was confident of being released by the powers behind his deadly activities.

“He boasted that he will soon be released as was the  case at DSS headquarters when he was arrested late last year but only to be released three months after to start work again,” one of our sources, said.

When contacted, the spokesperson of the Defence Headquarters, Chris Olukolade, a Major General, declined to confirm or deny the arrest.

“Many terrorists are being interrogated as we speak and I do not want to comment on any specific case at this time,” Mr. Olukolade said.

A deadly car bomb at Nyanya bus station near Abuja, had on April 14 killed at least 75 people and injured 124 more.

Two weeks later, on May 1, another round of explosion went off around the same area, killing 19 and injuring 66 others.

On May 20, multiple explosions  occurred around the ever-busy Jos Main Market, between Railway Terminus and the temporary site of the Jos University Teaching Hospital, killing over 200 people.

At least three people were killed and three others injured when another explosion near a football viewing centre rocked the city four days later on May 24.

The arrested suspect reportedly confessed his involvement in the four bombings.

Truck crushes all 14 bus passengers to death in Edo

Retrieving More than Just Our Girls, By Odera Okakpu