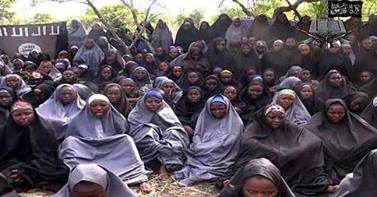 The Boko Haram insurgent group has released four of the over 250 schoolgirls kidnapped from the Government Secondary School, Chibok, Borno State, an official has said.

The Chairman of Chibok Local Government Area, Bana Lawan, said on Wednesday that the four girls were released by their captors on Tuesday after they fell ill; thus bringing to 57 the number of girls accounted for.

Mr. Lawan spoke in Abuja at a one-day stakeholders meeting for validation of draft humanitarian response plan for the abducted girls.

The meeting was organised by the National Emergency Management Agency, NEMA.

Represented by the council’s Director of Personnel and Management, Musa Kolo, the chairman commended Nigerians for showing concern and support for Chibok people, saying the support restored the hope and aspiration of the people for the return of peace to the community.

He commended the Federal Government’s prompt intervention through the provision of relief items for the people.

He urged the Federal Government to resuscitate the facilities destroyed by the insurgents and improve security in the affected school to boost the morale of the students.

Mr. Lawan explained that boys were encouraged to attend the school in Chibok because of the lack of education facilities in the area and appealed for the construction of boys’ hostels in the school.

He said the construction of the hostels would reduce the hardship faced by the students, who attended school from afar.

Mr. Lawan, who also decried the poor health facilities in the area, appealed for the deployment of medical personnel and teachers to the area.

He said the deployment of National Youth Service Corps members to the area would boost the educational and health needs of the people of Chibok.

Earlier, the NEMA Director-General, Mohammad Sani-Sidi, said the meeting was aimed at strengthening the coordination mechanism for humanitarian response in Chibok.

“While the Federal Government is working towards the safe release of the abducted girls, it is important that a sectoral response plan is prepared for their rehabilitation and reintegration back to normal life.

He said NEMA and other actors had intervened in crisis occasioned by insurgency in Chibok by providing food and other items, water and medicaments for the affected people.

Also the UN Resident Coordinator in Nigeria, Dauda Toure, said the organisation had mapped out a 75 million-dollar intervention plan for states affected by the state of emergency in the north-east.

He said the UN system in Nigeria has developed an integrated response package to address the humanitarian needs in Chibok.

He said the UN system would intervene in the areas of health, peace and conflict resolution, water and sanitation, among others.

April 14 marks a watershed in the attacks carried out by members of Islamic fundamentalist sect, Boko Haram, as they kidnapped over 250 girls from their secondary school in Borno State, and threatened to sell them if the federal government refuses to exchange them for terrorists in prisons.