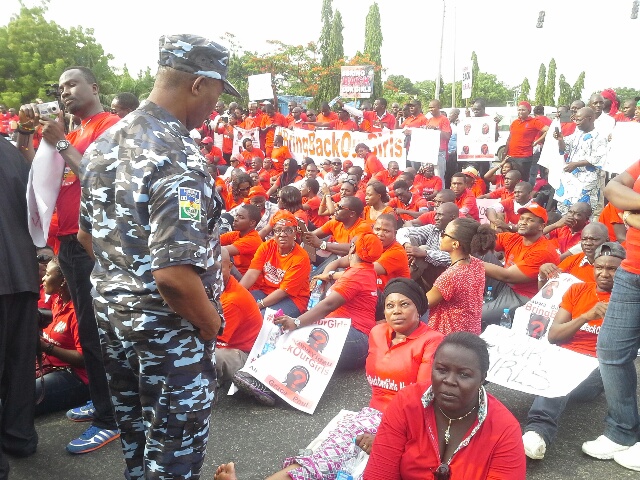 The delegation did not state any reason why Mr. Jonathan who was in the country declined to meet the protesters.

The hope of the #BringBackOurGirls protesters in Abuja that President Goodluck Jonathan would address them on Thursday was dashed as police officers formed a human barrier around the Eagles Square forcing the protesters to end their march there.

The protesters, who were supposed to march from Unity Fountain, near Transcorp Hotel, Maitama, to the Presidential Villa could not get to their destination as police officers blocked all roads leading to the villa.

Mr. Jonathan, however, sent a government delegation to meet the hundreds of protesters.

The delegation did not state any reason why Mr. Jonathan who was in the country declined to meet the protesters.

The delegation sent to meet the protesters at the Eagle Square include the Secretary to the Government of the Federation, Pius Anyim; Minister of State for Abuja, Olajumoke Akinjide; and presidential spokespersons, Reuben Abati and Doyin Okupe.

Mrs. Akinjide read a letter addressed to the protesters saying the Federal Government is appreciative and supportive of their efforts.

The President in the introductory part of the speech thanked the international partners who had taken time out to join in the campaign against the kidnapping of the school girls in Chibok, Borno State.

“Many other groups have sent messages in solidarity and we want to use this opportunity to thank them all.

“This wicked act has indeed been very painful,” he said.

Part of the content of the letter angered the protesters.

“Yesterday in China, a market where ordinary people go to sit was bombed,” Mrs. Akinjide read.

The statement caused mumbling and grumbling amongst the protesters as a woman turned to another and said “What does this have to do with what we are talking about?”

The minister continued to read the president’s letter.

“In the last few weeks, some individuals who call themselves Boko Haram abducted our daughters, the future leaders in our nation and have refused to release them.

“There must be a united movement for the release of our daughters and that movement must be turned around to be a united action against terrorism.

“Government has mobilised our resources, monetary and diplomatic for the search of our girls who have suffered so much trauma in captivity by agents of terror”

“From the very first day this kidnapping occurred, the federal government took action by telling the security agencies to go after the abductors.”

At the end of Mrs. Akinjide’s speech, the leader of the protest, Oby Ezekwesili, expressed dissatisfaction with the response of the president. She said the protesters would have preferred the president addressed them himself.

The #BringBackOurGirls movement vowed to continue their daily protest until the kidnapped girls are brought back home alive.

The girls were kidnapped by the Boko Haram from the Government Secondary School, Chibok, Borno State, on April 14.