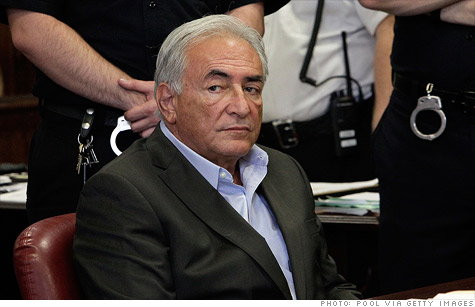 The film is billed as a piece of fiction and comes with a legal disclaimer.

Former IMF chief, Dominique Strauss-Kahn, has instructed lawyers to sue the makers of a movie that seemed to portray his sexual assault episode with a maid.

The film which featured veteran French star, Gerard Depardieu, shows a sex addict who commits a sexual assault on a hotel maid, his lawyer said on Monday.

“Welcome to New York” by Abel Ferrara, which had a private screening on the sidelines of the Cannes film festival at the weekend has been on pay-per-view in France.

The film is billed as a piece of fiction and comes with a legal disclaimer.

But Strauss-Kahn’s lawyer said the film was defamatory in that its subject matter was similar to the accusations levelled against Strauss-Kahn.

The former CEO was forced to quit the Washington-based International Monetary Fund, in 2011 after a New York hotel maid accused him of sexual assault.

Strauss-Kahn settled a civil case taken by the maid after criminal charges were dropped.

“This happened three years ago and he was cleared,” lawyer Jean Veil told Europe 1 radio on Monday.

“He is frightened, sickened (by the film). He has instructed his lawyers, myself, to make a complaint for defamation based on accusations of rape on the insinuations made throughout this film.”

Interviewed by Reuters TV in Cannes, filmmaker Ferrara said the film was fiction and that he had the right to choose his subjects.

“I’m not on trial,” Ferrara said. “I’m an artist, I have freedom of speech. I’m from America. I’m from the country of the free, land of the free and home of the brave.

The film begins with an extended sex-party scene before the encounter between the main character, George Devereau and a maid.

Throughout the over 20-minute scene, Depardieu appears naked and flits from one bacchanalian encounter to another.

Reporters at the screening were handed a gift bag containing condoms and Viagra.

Trade publication Variety called the film in a review “a sure-fire scandal-starter in France” and said the “audacious performance (from Depardieu) is undeniably the pic’s chief selling point,” a view shared by most critics.

Films that are not competing in the official 12-day film festival at Cannes often hold screenings nonetheless in order to gain publicity.

Following the “Welcome to New York” screening, the film was made available throughout France on pay-per-view.