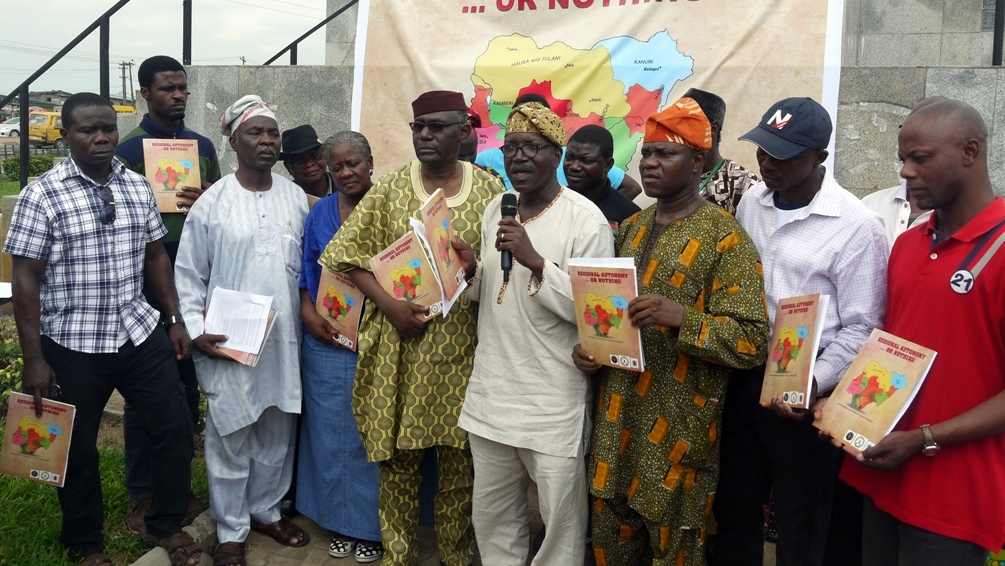 “We are therefore baffled at the take-it-or-leave-it attitude of delegates from other ethnic nationalities, particularly the Northern delegates.”

At a press conference in Lagos to unveil a publication ‘Regional Autonomy…or Nothing,’ the groups demanded that the states in the South-west have a regional government with its own constitution and unfettered political and fiscal autonomy, except on issues it agrees to cede to the federal government.

The groups, who stated that they had the support of two-thirds of the Yoruba people, also demanded a negotiated Exclusive, Concurrent, and Residual list; a unicameral legislature and parliamentary form of government at the centre; and establishment of regional governments.

“Nigeria is at a trying and testy juncture. One would therefore expect that we all should seize any opportunity to build consensus and reclaim the country from wrong-footed ideas and practices that brought Nigeria to this sorry state where it is difficult to imagine a better future,” said Tokunbo Ajasin, son of Adekunle Ajasin, former Governor of Ondo State; who spoke on behalf of the coalition.

“We are therefore baffled at the take-it-or-leave-it attitude of delegates from other ethnic nationalities, particularly the Northern delegates who circulated a document full of fallacies few weeks ago,” he added.

The document, ‘Key issues before the Northern delegates to the 2014 National Conference,’ presented to Confab delegates is riddled with “distortions” and “outright falsehood,” according to the Yoruba groups.

Mr. Ajasin said that it was inconceivable that Northern leaders were the ones leading the campaign against devolution of power and restructuring of government.

“If any region needs a stronger federating unit with greater capacity to provide education, health, security, wealth creation and other social amenities, it is the North where strong links exist between the level of poverty and conscription of innocent youths into extremist tendencies,” Mr. Ajasin said.

“It appears Northern leaders are not concerned, and indeed have no plan for the teeming youth from the region, as long as they are able to continue clinging to their hold on power,” he added.

The rest of the groups’ demands include a new Constitution drafted from the resolutions and conclusions of the ongoing National Conference followed by a referendum, and an appropriate budgetary provision for Lagos that is part of the First Line Charge in the Federation Account.

“We are not enforcing our demands on others. They are free to explore whatever suits them while we should be free to organize our governance the way it suits us,” Mr. Ajasin added.

A handful of people at the press conference bore placards with such inscriptions as ‘No Restructuring, no election;’ ‘Boko Haram has made one Nigeria impossible;’ ‘Nigeria expired 31st December 2013 (Amalgamation Treaty of 1914).’

Ayo Afolabi, National General Secretary, Afenifere Renewal Group, said that it has become imperative for the Yoruba people to discuss the nature of their relationship within Nigeria.

“We have a country where we are not happy with what is happening. We hope the opportunity of the confab will be used to address these issues. If it doesn’t work for us, then we go our separate ways,” Mr. Afolabi added.