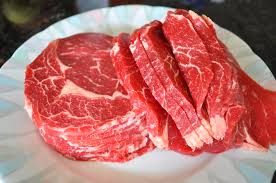 Nigeria to increase beef consumption to 1.3 million tonnes by 2050 – Adesina

The Minister of Agriculture and Rural Development, Akinwumi Adesina, has projected an increase in beef consumption in the country from 360,000 tonnes to 1.3 million tonnes by 2050.

Mr. Adesina said this on Thursday in Abuja during the 2nd induction ceremony of 12 individuals as fellows of the Nigerian Institute of Animal Science, NIAS.

He stressed the need to get the nation’s livestock system working properly in order to meet the increasing demand for beef.

“We need to invest in animal genetics, in artificial insemination and modernise our abattoirs in the country.’’

The minister attributed the high rate of clashes between Fulani herdsmen and farmers to climate change.

He observed herdsmen in countries like Mali, Niger and Burkina Faso were moving their animals down south for grazing, thereby putting pressure on Nigeria’s carrying capacity.

Mr. Adesina explained the 19 million heads of cattle in Nigeria was not enough to create the level of crisis the country had recorded in recent times.

On youth involvement in agriculture, he reiterated the need to change the curriculum for teaching agriculture in the country’s universities to attract more youth to the sector.

“We need to have younger entrepreneurs in agriculture; the average age of our farmers is between 55 years to 65 years.

“Unless we deal with the issues now, there would be no farmers to feed us in the next 50 years,” he warned.

The minister urged school management across the country not to teach the science aspect of agriculture alone, adding that they should also teach the entrepreneurial skill needed to set up agribusiness.

In his address at the occasion, former Ghanaian President, John Kufuor, noted that 60 per cent of arable land in Africa had not been cultivated.

He predicted that the population of the continent would double by 2050 and therefore, stressed the need to double food production in order to create wealth.

He commended the Agricultural Transformation Agenda of the Federal Government, saying that it had set the pace for transforming the continent.

Mr. Kufuor urged the management of NIAS to be at the forefront in influencing government’s decision to facilitate credit for farmers and to adapt modern climate friendly methods of farming.

He said that former President Olusegun Obasanjo would be conferred with the first honourary fellowship of the institute for his contributions to the institute and national development.

Mr. Njoku, a professor, congratulated the new fellows and urged them to continue the good work that had brought them the honour.