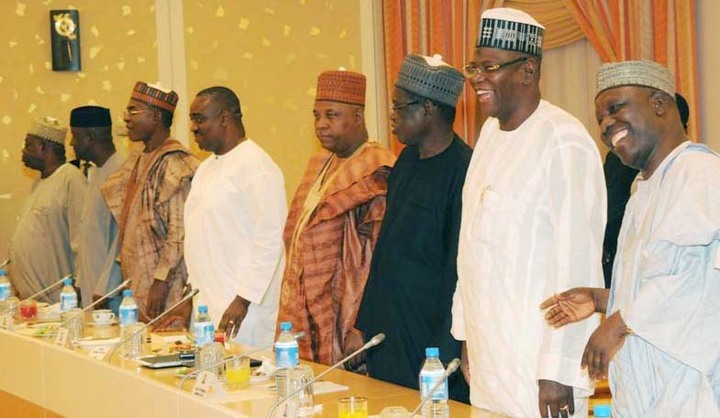 Boko Haram to be stamped out in three months – Northern Governors

“The 19 governors that make up this forum would continue to condemn the invasion of the north and we are happy with the Federal Government.

The Northern States Governors Forum, NSGF, on Saturday declared support for the assistance offered Nigeria by the U.S. and other countries in the rescue efforts of the over 250 girls kidnapped from Chibok, Borno State. The forum also said all elements of the Boko Haram terrorists group would be stamped out within three months.

Governor Babangida Aliyu, Chairman of the Forum, said these in an address at a joint Northern States Governors/United States investors’ summit held in Abuja.

“Contrary to insinuations that leaders in the region failed to openly condemn the rascality of the terrorists, we have instead worked subtly to see to the end of the insurgents.

“The coming of the United States’ army to rescue the abducted Chibok school girls was as a result of the meeting the northern governors held with the American Government.

“The 19 governors that make up this forum would continue to condemn the invasion of the north and we are happy with the Federal Government.

“The group is equally happy with United States, Britain, France, China and Canada which have offered support to tackle the insurgents,’’ he said.

Meanwhile, a communiqué issued at the end of the summit, said the summit was organised to accelerate the socioeconomic development of the north and the country as a whole.

It said that the symposium organised by the United States Institute of Peace (USIP) and NSGF between March 17 and March 19 in Washington laid the foundation for the summit and partnership with investors.

The communiqué, which was signed Governor Aliyu, said strengthening relations between the entire northern governors through the summit was the right recipe for the development of the area.

“The summit addresses the issues of concern to the people of the region, and particularly the challenges faced by some states presently plagued by poverty, youth unemployment and insurgency.

“It seeks to act as vehicle through which the NSGF attracts partnership with the international investment community and aid agencies to assist in rebuilding, reconstructing and rehabilitating the north,’’ it said.

According to the communiqué, the courage and confidence reposed in the region in the face of enormous insecurity challenges in the country was well-known.

It said the summit would complement the gains of the just concluded World Economic Forum, WEF, for Africa and the far reaching initiatives of the Federal Government to develop the country.

It, called on all investors to have confidence in the opportunities that abound in the region, adding that the deficit found in region should be a motivating factor to invest.

The summit was organised by NSGF in conjunction with the Nigerian Embassy in Washington.

All the 19 governors made presentations highlighting areas of respective states’ potentials and available opportunities for investors to note.

The Silence From Our Neighbours, By Hannatu Musawa