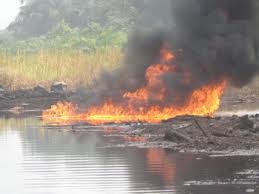 The prosecutor had told the court that the accused committed the offences on September 5, 2012 at about 6.00 p.m. in Arepo.

Mr. Soledayo was giving evidence at the resumed trial of the 10 suspects charged with pipeline vandalism and the murder of two engineers of the Nigerian National Petroleum Corporation, NNPC.

Led in evidence by the prosecutor, Justin Enang, the witness told the court that he obtained statements from the third, ninth and tenth accused on the offences committed.

He said other police officers interrogated the remaining seven accused.

Mr. Enang said on October 6, 2012, the tenth accused volunteered to lead a team of police officers, headed by John Ereme to the scene of the alleged crime at Arepo.

According to him, they found two shallow graves at the scene and immediately contacted the NNPC for possible means of digging and removing the corpses.

The IPO also said that on November 21, 2012, a team of NNPC officials and some pathologists also visited the scene, and that the corpses were exhumed for a post-mortem analysis.

Mr. Soledayo then sought to tender the statement of the accused as exhibit before the court, but the defence counsel raised an objection.

He claimed that the statement was obtained “under duress’’.

Justice Mohammed Idris adjourned the case to May 22 for continuation of trial.

The accused were re-arraigned on April 29, 2013, on an amended seven-count charge.

They all pleaded not guilty to the charge, but the judge ordered their remand at the Ikoyi Prisons, and asked for accelerated hearing of the case.

The prosecutor had told the court that the accused committed the offences on September 5, 2012 at about 6.00 p.m. in Arepo.

He said they conspired to vandalise NNPC pipelines in the area and also scooped large quantities of petrol for sale.

He alleged that on sighting engineers from the NNPC, assigned for routine maintenance of pipelines in the area, the accused, who were armed with guns, opened fire on them.

“In the process, the accused shot three of the engineers dead.’’

The offence contravened the provisions of sections 3(6), 7(a), 7(b), and 17(a) of the Miscellaneous Offences Act, Laws of the Federation, 2004, the prosecutor added.

The offence of murder also contravenes the provisions of Section 319 of the Criminal Code, Laws of the Federation, 2004.