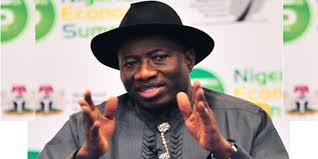 Presidents says he does not need to sack his cabinet members to demonstrate his seriousness of the fight against corruption.

President Goodluck Jonathan on Sunday waved off allegations of corruption and abuse of office levelled against some key members of his cabinet in recent times.

The President described the allegations as mere perception, not reality.

“Over 70 percent of what are called corruption, even by EFCC (Economic and Financial Crimes Commission) and other anti-corruption agencies is not corruption, but common stealing. Corruption is perception, not reality,” the President said during his 7th Presidential Media Chat on Sunday.

A member of the four-person panel of journalists asking the president questions had asked about allegations that Mr. Jonathan was not doing enough to act on the various allegations of corruption and impunity against some of his ministers. In his response, Mr. Jonathan said some of the allegations, particularly by the House of Representatives, were politically-motivated to discredit and bring down his government.

The President also reiterated his justification of the suspension of the then governor of the Central Bank of Nigeria, CBN, Lamido Sanusi. He said if Mr. Sanusi had not been removed, the CBN governor would have come up with another figure of missing monies to discredit government.

“The governor of the Central Bank came up to say Nigeria lost $49.8billion (N7.96 trillion) within 18 months between 2010 and 2011. The information rattled so many people. We got calls from all over the world. But, we are aware that the foreign aids that come into Africa within the 18 months period is less than $20billion (N3.19 trillion).

“$50 billion is a lot of money. Where did you have $50billion for God sake? These are figures that are quite difficult to believe. The CBN governor is not an ordinary man. Within a month, he said the country lost $12 billion (N1.91 trillion). After some weeks, he said it was $20billion that was missing. Probably, if he were still there he could have mentioned another figure by now. But, because of the suspension, no other figure has come out,” the President said.

Mr. Jonathan noted that Nigeria did not have $20 billion that one person or a group of persons could steal. He insisted that it was impossible for anyone to steal $20 billion without the country knowing.

Assuring that the forensic audit of the Nigerian National Petroleum Corporation, NNPC, accounts was on-going, the President said apart from the Executive, the Senate was also looking into the issue. He, however, did not give further details about who was handling the audit, when it began and for how long it would last. He said at the end of the audit, the correct status of the ‘missing’ $20 billion would be known.

On the N10 billion reportedly spent by the Minister of Petroleum Resources, Diezani Alison-Madueke on hiring private jets, Mr. Jonathan stoutly defended the embattled minister, saying the probe by the Reps was “more of politics than work.”

“I am not aware that the Minister approached the courts to stop the investigations (by the House of Representatives)” the President said. “I believe the issue should have been resolved now, without even getting to the Accountant General, because the minister has appeared before the parliament for more than 200 days.”

He said most of the ministers in his cabinet spend the greater part of their working hours at the parliament, pointing out that no country can progress this way.

“Quite a number of organisations are beginning to question the rationale of some of the probes. What we should understand is that the parliament is made up of politicians. They play politics with everything they have,” he said. “If you follow the probe by the parliament, especially by the House of Representatives, one would see that it is more of politics than work. They should avoid getting involved in Parliamentary dictatorship.”

“We are trying to avoid executive dictatorship. As executive president, I must be mindful about how I use my powers. If I exercise about 40 to 50 per cent of my powers, Nigerians would say I am a dictator. The parliament has to exercise their powers based on law. If they are not careful about how they deploy their powers, they would become a kind of dictatorial body that would not allow them to work.

“I am not trying to defend or protect anybody. What I am saying is that it has become very clear that things are not done properly,” Mr. Jonathan added.

He said the Petroleum Resources Ministry was one that has always worked using private jets, and would continue to hire jets, because of their peculiar activities. He, however, said he was investigating the present accusation based on allegations that prices could have been inflated.

On why he was yet to act on any of the reports indicting some of his ministers for corruption, Mr. Jonathan said he did not need to sack his cabinet members to demonstrate his seriousness with the fight against corruption.

“Some people say the president is too gentle. I have been the president for four years now, how many IGPs (Inspector General of Police) have I changed? How many Service Chiefs have I changed; how many Director of SSS (State Security Service? There was a day I sat down in my office and removed the Chief of Defence Staff, the three Service Chiefs, the IGP on the same day. I have been changing ministers. In other countries ministers serve 20 to 25 years. In Nigeria, they believe a functionary of government should spend no more than a year in office. If the minister spends up to three years, then the President is weak.”

He alluded to the limits a President could do on the issue, saying as a president, he would need to verify some of the reports to confirm their truthfulness.

“Sometimes, it is difficult, especially when people are after you from different angles. Some people would even set up a magazine, because they want to face one man. There is one paper that came and disappeared, one NEXT (234NEXT). From the very first day it came out, its main purpose was to bring government down. In fact, it was focused on the Petroleum Ministry and when it could not succeed, the publisher simply disappeared.”

The NEXT Newspapers, was known for its in-depth investigations before it was rested in 2011.