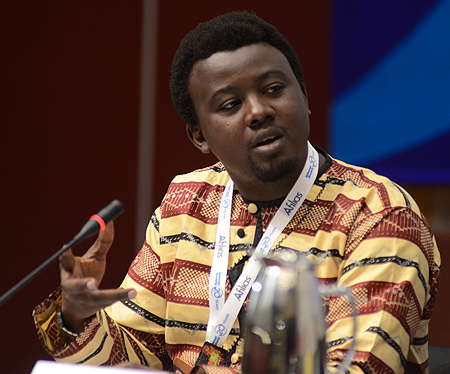 Gbenga Sesan had asked that WEF platform be used as a campaign tool to free Kidnapped Chibok school girls. After about two hours with the Department of State Security, SSS, Gbenga Sesan, a vocal advocate for the campaign to free the over 200 girls abducted in Chibok, Borno State, has been released. He was called in for a chat because he had been using his twitter handle and trending hashtag #BringBackOurGirls to consistently advocate the freedom of the girls abducted from their secondary school. He also asked participants of the World Economic Forum, WEF, to use the event and their influence as an opportunity to campaign for the freedom of the girls. “Anything and everything that happens in Nigeria until government is able to #BringBackOurGirls is hereby declared a campaign opportunity.

Mr. Sesan had tweeted. At about 10 a.m., Mr. Sesan got a letter from the SSS inviting him for a chat. He honoured the invite and got to the SSS office at 12: 40 p.m. Mr. Sesan told PREMIUM TIMES that he was released at 3:00 p.m. He had to wait for about one hour for a meeting with the Director of the SSS, who asked him not to disrupt World Economic Forum on Africa which will hold on May 7-9.

“They invited me for the fact that I was asking that World Economic Forum becoming an opportunity to discuss #BringBackOurGirls.” Short of asking him to stop advocating for WEF participants to use the event to push for the freedom of the girls, the Director of the SSS, Mr. Sesan said, told him not to disrupt something (WEF) that is good news for Nigeria. He, however, says the meeting with the SSS will not stop him from his social media campaigns as he already began tweeting about the chat and the cause. His invite is coming at a time when Naomi Mutah Nyadar, the leader of the ongoing rescue Chibok girls protest was arrested for no recorded offence by the police, and then whisked away in a presidential van to an unknown destination. She was also later released after about 10 hours. Another leader of the protest, Angus Ndirpaya, told AP that agents of the SSS had driven her and Ms. Mutah to the police station after an all night meeting with the Nigerian First Lady, Patience Jonathan, who has no constitutional powers to either call for an investigation into the Chibok kidnap or order the arrest of any citizen. Mrs. Jonathan had in a meeting on Saturday promised to find the girls abducted from their boarding facility at the Government Girls Secondary School, Chibok, Borno State.

Slight traffic delay but I now know Department of State Services letter is an “invitation to a meeting”. Summon will be honoured later today — #BringBackOurGirls (@gbengasesan) May 5, 2014

I’m at the SSS office now. I will tweet when I leave the chat. — #BringBackOurGirls (@gbengasesan) May 5, 2014