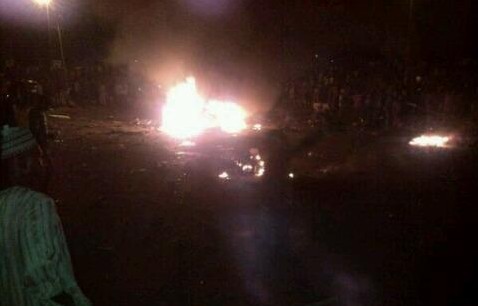 An explosive device went off in Nyanya two weeks after a previous one.

The United States of America and the Christian Association of Nigeria have condemned the explosion at Nyanya, Abuja on Thursday.

In a statement by the Information Office of its Nigerian Embassy, the U.S. on Friday expressed disapproval of the attack saying it is an affront on democracy and an attack on innocent people.

“Our thoughts are with the families and loved ones of those who were killed or injured in this heinous act.

“This attack is not only on innocent people but on a democratic nation itself. Lawless violence and intimidation have no place in a democracy.

“We continue to stand with the Nigerian government and people as they face the threat of violent extremism,” the U.S. said.

Similarly, the CAN President, Ayo Oritsejafor, in a statement released on Friday, signed by the Secretary General of the association, Musa Asake, said the news of the attack, the second in two weeks and at the same area, was shattering.

Mr. Oritsejafor said “It is an act that must be condemned by all, no sane person will seek to destroy the lives of fellow compatriot in the name of an `ungodly ideology’ of a so called `religious belief’.

He said “terrorists or their sponsors must not be given the opportunity to prevail and I state categorically again, `evil cannot overwhelm good and darkness cannot prevail over light’. This is a known fact that I want all Nigerians to take to heart in these trying times.”

Mr. Oritsejafor said the attack is an indication that terrorists are set to destabilise Nigeria and its work force by making them afraid.

“We must not allow this to happen,” the CAN president said.

He commiserated with the families of those who lost their lives, prayed for the recovery of those injured and called on security agents to contain the situation. Mr. Oritsejafor said CAN will take the mayhem currently going on in the country to God in prayer so he can fight Nigeria’s battles.

He asked Nigerians to remain patriotic in the face of the terrorists’ act saying “let us not allow these acts of inhumanity to dampen our spirit of patriotism for our country, let us all rise against this monster”.

The recent explosion comes two weeks after an explosive device went off at Nyanya bus stop, just opposite the scene of Thursday’s explosion.

Witnesses and journalists say over 200 persons were killed in that attack, but the government put the casualty figure at 75. It has become a norm for official and witnesses estimation of deaths to conflict.

The renewed attacks on Abuja appear to be part of a planned script by the Boko Haram.

In a recent video by its leader, Abubakar Shekau, the terrorist group claimed responsibility of the April 14 attack and vowed to carry out bigger terrorists acts in Abuja.

“Let the world know that we are responsible for the bombing within Abuja in an area called Nyanya.

“We are in your city but you don’t know where we are…,” Mr. Shekau had said.