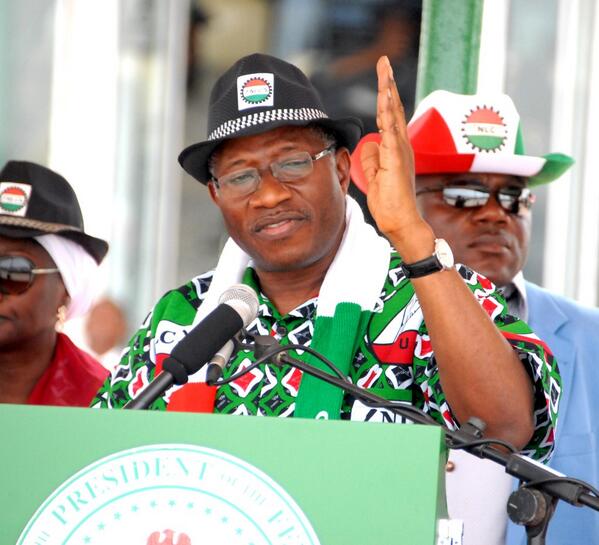 “If you talk about ownership of private jets, Nigeria will be among the first 10 countries in the world. Yet, they are saying that Nigeria is among the five poorest countries.”

The World Bank President, Jim Yong Kim, had on April 4 in New York ranked Nigeria, along with India, China, Bangladesh, and the Democratic Republic of Congo as the countries in the new global poverty categorization.

“The fact is that two-thirds of the world’s extreme poor are concentrated in just five countries – India, China, Nigeria, Bangladesh, and the Democratic Republic of Congo,” he said.

“If you add another five countries — Indonesia, Pakistan, Tanzania, Ethiopia, and Kenya – the total grows to 80 per cent of the extreme poor.”

President Jonathan, however, said in his address to Nigerian workers at the May Day rally in Abuja, that the World Bank report was false as Nigeria is not poor.

“The challenge of the country is not poverty, but redistribution of wealth,” the President said.

He said the realities on ground did not portray the country as a poor nation, but one which abundant wealth that needed to be evenly redistributed among its populace.

The President said his administration was working to put policies in place to ensure that Nigerians had access to financial resources to create wealth for themselves.

“Nigeria is not a poor country. Nigerians are the most travelled people in the world. There is no country in the world you go that you will not see Nigerians there. The GDP (gross domestic product) of Nigeria is over half a trillion dollars and the economy is growing at close to 7 per cent,” he said.

Mr. Jonathan also cited Aliko Dangote, who was recently classified among the 25 richest people in the World, as another reason to showcase Nigeria’s wealth.

During his recent state visit to Kenya, he said he participated in a programme organized for Nigerian and Kenyan businessmen to interact.

“The number of private jets that landed in Nairobi owned by Nigerians that day was a subject of discussion in the Kenyan media for over a week.

“If you talk about ownership of private jets, Nigeria will be among the first 10 countries in the world. Yet, they are saying that Nigeria is among the five poorest countries.

According to the President, there are some Nigerians who need help and they are given a certain amount of money and they would not even regard it important to say thank you.

He said if the same Nigerian were to travel to other countries and give such an amount to others, they would celebrate him forever.

“The World Bank statistics shows that Nigeria is among the five poorest countries. But, our problem is not poverty. Our problem is redistribution of wealth,” the President said.

“Probably wealth is concentrated in very a few hands and a number of people do not have access to it, and that is why my administration is committed to ensuring the creation of wealth, in terms of financial inclusiveness, and we are working very hard to achieve this.’’

Specifically, he noted that in the agriculture sector, government introduced the electronic wallet system for farmers in rural areas to provide them access to income through affordable bank facilities.
Equally, he said government was also moving agriculture from just a rural development programme to wealth creation and major business programme, adding that government had taken pro-active steps and policies to stabilise power supply in the country to enable small and medium-scale enterprises thrive.

The key commitment of government, he noted, was to ensure that many Nigerians have access to finance so that they would be able to create wealth for themselves.

The President, who said there could be political undertones in the processes of ratings by international bodies and global rating agencies, said many countries were downgraded economically in the past few months, including some African countries for some political considerations.

He said despite explanations by Nigeria on its economic outlook, the country’s position was not seen as convincing, resulting in the decision to downgrade the country’s economy to BB- minus.

The President said the justification given for the BB-minus rating of the country’s economy was based on the forthcoming elections, which has resulted in in-fighting among politicians and its attendant effect on the economy.

He assured that with the support of Nigerians and in particular, the organised labour, Nigeria would overcome its challenges and take its pride of place in the globe.

On the on-going National Conference, he stated that it was not a personal agenda, but meant to evolve a roadmap that would redefine Nigeria, for the common good and progress of the country.
Describing the conference as a roadmap for Nigeria, he denied having any emissary to define any issue for his own interest.

“What we want is a Nigeria for our future generation. We will lead our country to where we want to go,’’ he said.

The President noted that the overall interest of the country informed the nominations of many representatives of the organised labour, civil society organisations and youth organizations to the conference.

“The conference is to redefine Nigeria,” he assured, pointing out that the resolution of the conference would be sent to the National Assembly for implementation for national good.

He expressed the believe that at the end of the conference, if the resolutions are agreed by everybody, he would be able to work with the National Assembly to see that whatever they agreed on were approved.
All what the country wants is to agree on those things that are common and useful for the country.

The Minister of Labour, Emeka Wogu, said that the theme of the 2014 Workers Day, “Building Enduring Peace and Unity’’ was apt and relevant.

Urging labour unions to have faith in the Jonathan administration as it continued to implement policies and plans for national emancipation, the Minister said the administration had ensured and would continue to ensure that the voice of labour was heard.

Mr. Wogu added that the Labour Bill drafted to improve the conditions of workers pending before the National Assembly would soon be passed into law. He urged the unions to be considerate in their demands.