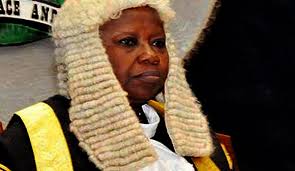 Ms. Olotu sued the Federal Government following her compulsory retirement after a recommendation by the National Judicial Council, NJC.

The absence of Justice Adeniyi Ademola of a Federal High Court on Monday stalled hearing in a suit filed by retired Justice Gladys Olotu, challenging her compulsory retirement by President Goodluck Jonathan.

Ms. Olotu sued the Federal Government following her compulsory retirement after a recommendation by the National Judicial Council, NJC.

The court did not sit on Monday because the judge was absent and the hearing was, therefore, stalled.

No reason was given for the court’s inability to sit and no date was fixed for the next hearing in the matter.

The NJC had on February 27 recommended Ms. Olotu’s compulsory retirement to the president due to “findings on the allegations of gross misconduct contained in petitions written against her’’.

Ms. Olotu had, ab initio, filed a motion ex-parte before Justice Adeniyi, seeking leave of the court to apply for an order of “certiorari” or judicial review of her case.

Sunday Ameh, her counsel, who filed the application on her behalf, said that the suit was intended at protecting his client’s fundamental rights.

At the mention of the case on March 19, Justice Ademola adjourned the case to April 28 on the request of NJC’s counsel, Jimoh Lasisi.

Mr. Lasisi had requested for an adjournment because, according to him, he was served with the court processes only 24-hours earlier.

The Federal Government in its written submission had, however, asked the court to strike out the suit.

In a preliminary objection filed by its counsel, Taiwo Abidogun, from the office of the Attorney-General of the Federation, the government said the court lacked jurisdiction to entertain the suit.

Mr. Abidogun argued that sections 251 and 254 of the 1999 Constitution exclusively conferred jurisdiction on matters pertaining to the employment and retirement of the plaintiff on the National Industrial Court, NIC.

“My Lord, the substantive matter relates to and is connected with the employment of the applicant/plaintiff, who is an erstwhile employee of the Federal Government of Nigeria.

“The Federal High Court has no jurisdiction over employment matters by virtue of sections 251 and 254 of the 1999 Constitution as amended.

“We humbly urge your Lordship to strike out this matter for want of jurisdiction in order to save the time of this honourable court and the parties,’’ Mr. Abidogun said.