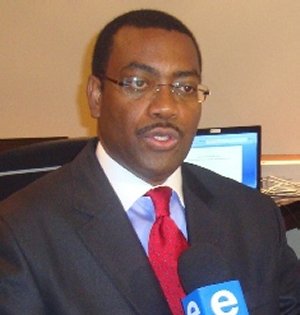 The Federal Government has approved a loan of $152.12 million (N24.3 billion) secured from the African Development Bank, ADB, for the Agricultural Sector.

This was disclosed by the minister of Agriculture, Akinwunmi Adesina, while briefing journalists after the weekly meeting of the Executive Council of the Federation, FEC.

Mr. Adesina said the fund, already approved by the ADB, is a grant to support agriculture in several Nigerian states.

The loan, he said, is provided at 1.5 per cent interest rate is repayable in over 22 years, and is strategic for the modernization of agriculture and encourages investments.

Mr. Adesina said the loan will be used to develop rice, sorghum, and cassava in commercial production and “it will be used to support private sector processing and value addition for the commodities”.

He listed the zones to be focussed on to include: Adani-Omo in Ebonyi and Enugu states for rice and cassava; Bida and Badegi for Rice; Kano and Jigawa for rice, tomato, and sorghum; as well as Kebbi and Sokoto for rice and Sorghum.

“The loan will also be used for agro-processing development, value addition, market information system for farmers in those areas, (and to) expand access to financial services and crops insurance,” he said.

The minister, who briefed alongside the Minister of Information, Labaran Maku, also stated that there are 27 local governments that are covered by the fund; and it has been developed in close partnership with all the state governors and community involvement.

“There will be 120,000 jobs that will be created by the development of the staple crops which will include 36,000 women; and 200,000 youths are going to participate in the initiative.

“It will allow us to add 20 million metric tons of production of rice, cassava and sorghum into domestic food supply.

He announced that the staple crops processing zones are being developed in conjunction with the United Nation’s Industrial Development Organization, UNIDO.

According to the minister, the approval of the loan by the ADB is as a result of the progress Nigeria has made in the sector and “we promise that we will add 20 million metric tons of food to our domestic food supply by 2015. As of now we have done 15 million metric tons”.

He added that “Despite the progress made do far, there are a number of challenges that we have seen in the rural areas. One of those is the low level of agro processing.

“We have also poor rural infrastructure which make it difficult for farmers to evacuate their produce.

“We also noticed that a lot of companies that process food in Nigeria are located in the urban areas like Lagos and they import all raw materials, process it and send it back inward.

“We are changing all of that by adding value to every single thing we produce in the country and add value where it is produced. When we do that not only do we reduce cost of transport we reduce storage loses, transport loses; we create jobs and revive our rural areas”.

Terrorism in Nigeria: CAN declares fasting and prayer

Terrorism in Nigeria: CAN declares fasting and prayer