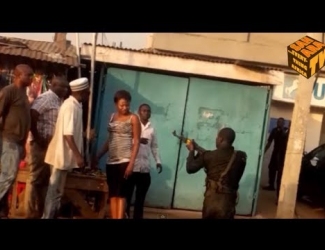 The Nigerian police officer takes aim at one of his victims

A video showing a male Nigerian police officer, armed with an AK-47 rifle and brutalizing two women on a Lagos Street, is now circulating on YouTube.

The video clip, published on Apr 18, 2014, showed the police officer trying to drown one of his victims in a muddy pond while a crowd watched.

The officer, apparently on guard at one of the banks in the area, had his rifle dangling from his shoulder as the drowning victim struggled under his grip.

The officer then pounced on the second victim whom the video showed intervening to rescue the first victim.

The clip, published by Sahara Reporters, showed the officer pointing his riffle at his victims before shooting into the air to create fear and disperse the crowd that was beginning to gather at the scene.

Sahara Reporters identified the police officer involved in the incident as Tafa Mohammed, who was on guard at Lewis Street, Lafiaji, in the Obalende area of Lagos Island during the incident.

Witnesses told the newspaper the victim angered Mr. Mohammed after she failed to give him a piece of fish from a pot of soup in her restaurant.

Witnesses claim the police officer was drunk, but PREMIUM TIMES is unable to independently confirm that.

An online crowd sourcing website, Nigeria Police Watch, which documents excesses by the Nigeria Police Force said similar intimidation and abuse of police powers are common within the force.