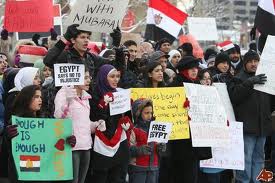 Mubarak is standing trail for the death of protesters during the Arab Spring.

Members of the National Council for Human Rights made the call at a meeting with Mr. Mansour on Wednesday.Egypt’s Caretaker President, Adly Mansour, has rejected a call to pardon three pro-democracy activists sentenced for holding unauthorised protests, independent newspaper, Al Masry Al Youm, reported on Friday.

The report said members of the National Council for Human Rights made the call at a meeting with Mr. Mansour on Wednesday.

According to it, Mr. Mansour, a former judge, insists that he is not willing to exercise his presidential power and pardon the activists because he does not like to interfere in the judiciary’s work.

The report also quoted Mr. Mansour as saying that the activists, Ahmed Maher, Mohammed Adel and Ahmed Douma, were iconic figures of a 2011 uprising that forced President Hosni Mubarak to step down.

It said other pro-democracy activists were facing trials for violating a law that required demonstration organisers to give three-day notice to police, who have the power to approve any rally.

Egyptian authorities argue that the directive is a welcome development as a means to curb the violent protests that hit the country since 2013 when the military deposed President Mohammed Morsi.

In December, an Egyptian court sentenced the three activists to three years in prison for organising illegal protests and attacking police officers.

The ruling was upheld by Egypt’s Court of Appeal recently, drawing local and global condemnation.

Hundreds of activists, protesters, journalists, politicians, clerics, and others, accused of being sympathetic to ousted President Mohammed Morsi and his Muslim Brotherhood, are currently in detention in Egypt.