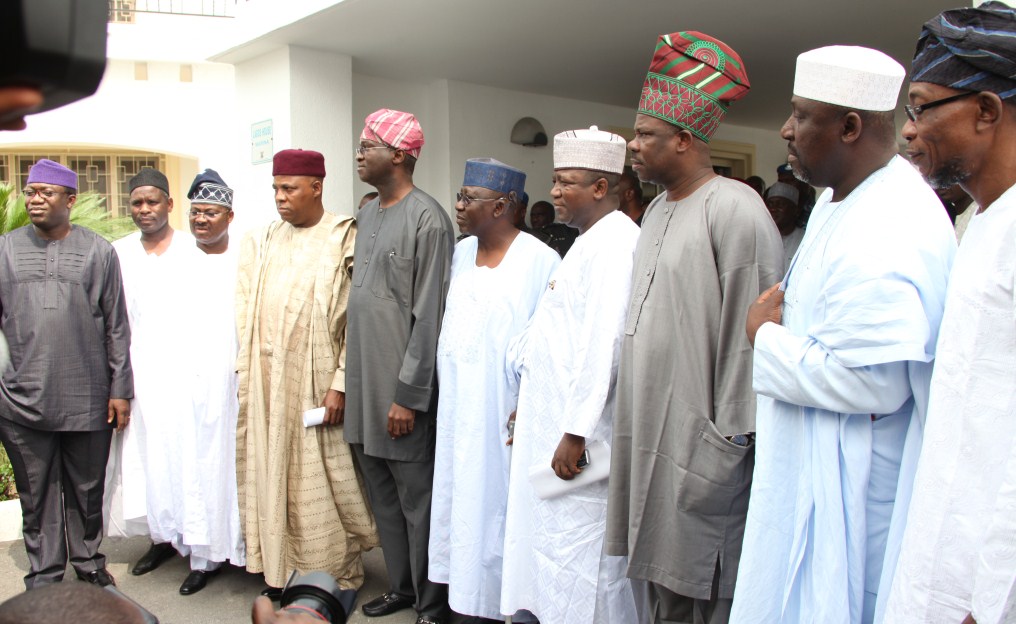 ”It is now clear that despite their inability to protect lives and property and to stop the terrorists attacks in the country, the presidency and the PDP are not interested in any genuine efforts to end the worsening security situation.The All Progressives Congress, APC, has accused President Goodluck Jonathan and the ruling party of playing politics with Nigeria’s security situation.

The opposition party said the president and the Peoples Democratic Party, PDP, engaged in deception to exclude APC Governors from a meeting Mr. Jonathan had called for Thursday to discuss the security situation in the country.

In a statement issued in Lagos on Friday by its Interim National Publicity Secretary, Lai Mohammed, the APC said after deliberately excluding its governors from the meeting, the presidency and the PDP then engaged in outright disinformation and distortion of facts to make it look as if the APC Governors deliberately boycotted the meeting, apparently in an effort to make political gain from the whole issue.

”It is now clear that despite their inability to protect lives and property and to stop the terrorists attacks in the country, the presidency and the PDP are not interested in any genuine efforts to end the worsening security situation.

“It is patently obvious that their aim is to make political capital out of the tragedy that has befallen Nigeria, rather than to ameliorate the cruel fate being daily suffered by the citizens,” Mr. Mohammed said.

The opposition party said the same presidency that invited all state governors to the expanded National Security Council meeting, as announced via a statement issued on April 16 by the President’s Special Adviser on Media and Publicity, Reuben Abati, had no qualms in ‘duping’ the APC governors out of the meeting and turning it to a parochial meeting of governors of the PDP and its ‘satellite parties’, only to shift the blame on the same governors who were conned!

The party said after the presidency publicly invited all state governors to the meeting, it then clandestinely reached out to the APC Governors to say the meeting has been called off, only to turn around and blame them for shunning the meeting.

”The Kwara State Government confirmed that its Chief Detail received a call from the presidency to the effect that the meeting had been called off. Then, the Deputy Governor of Borno State, who had already arrived in Abuja for the meeting, also learnt that it has been called off. Curiously, the meeting that was announced publicly by the presidency was not even listed among the President’s official engagement for Thursday.

”Despite all these glaring evidences of a grand plot to exclude APC Governors, the President’s assistant on New Media Reno Omokri, the same fellow who tried to malign the suspended Governor of the Central Bank of Nigeria using a fake name, took to Twitter to tell the world that the APC Governors shunned the meeting and to accuse them of playing politics with national security.

”Unfortunately, while the fallacious Omokri was twitting lies, the Chairman of the PDP Governors Forum, Gov. Godswill Akpabio, was telling journalists that the APC Governors were not invited to the meeting, and that it was initiated by the PDP Governors (not minding that the Governors of states controlled by APGA and Labour Party were in attendance).

”Who then is lying between the presidency and the Chairman of the PDP Governors’ Forum? Why would the presidency engage in such a grand design just to make the APC Governors look bad? Is this a part of the plan to shift the blame for the state of insecurity on the APC and to make the party look bad ahead of the 2015 elections and the preceding ones? Is this in furtherance of President Jonathan’s improper blame of the Governors of the worst-hit states of Adamawa, Borno and Yobe for the insurgency in their states? Can any genuine efforts to resolve the crisis exclude the Governors of the three states?

”The Presidency is playing a dangerous game by seeking to make political capital out of an insurgency that has claimed thousands of lives, and done incalculable damage to property and the economy. It is now clear that this Presidency has its eyes firmly fixed on benefitting from the insurgency, and that it had no interest in any genuine measures to end it.

APC however reiterated its earlier statement that in the overriding interest of the nation, it is willing and ready to be part of all genuine efforts to end the terrorist attacks, and that only a non-partisan approach could end the security crisis.

Yobo ruled out of Liverpool clash