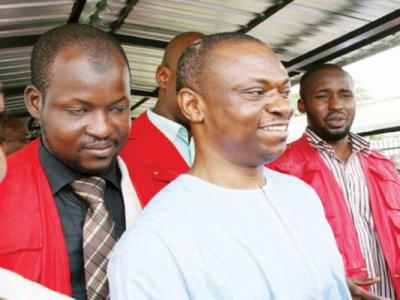 The accused were alleged to have to have granted credit facilities, manipulated shares and committed general banking fraud worth over N125 billion.

A Federal High Court in Lagos on Monday fixed June 17 to hear written addresses filed by counsel in the trial of Francis Atuche and Charles Ojo, charged with an alleged N125 billion fraud.

The judge, Saliu Saidu, adjourned the case for hearing of addresses, after he granted an application for extension of time filed by counsel to the accused, Anthony Idigbe.

Mr. Idigbe had informed the court of his motion for extension of time within which to file his written address and an order deeming the address as properly filed.
Justice Saidu granted the application and fixed June 17 for hearing of addresses.

The accused were re-arraigned before Justice Saidu on February 20, on an amended charge.

They had both pleaded not guilty to the charge, and Justice Saidu had allowed the accused to continue with the earlier bail granted by previous judges.

After their re-arraignment, the prosecutor, Kemi Pinheiro, had applied for a date for further mention of the case.

Mr. Pinheiro said the application is in line with the new practice direction of the courts, as the prosecution is duty bound to ensure speedy disposal of criminal cases.

He had, therefore, prayed the court for a date for mention, within which time the defence would have the opportunity of sorting out processes of the prosecution which it intends to oppose, so as to fast-track trial.

Mr. Idigbe had, however, opposed the submission of the prosecution, adding that practise direction was not applicable in the instant situation.

Counsel to Mr. Ojo, Osahon Idemudia, had aligned himself with the submission of the prosecution, adding that practise direction would enhance a speedy disposal of the case.

Justice Saidu had then adjourned the case for parties to address the court on the necessity of applying practise direction to the instant suit.
The accused were first arraigned in 2009 before Justice Akinjide Ajakaiye.

Mr. Ajakaiye had granted them bail in the sum of N50 million each, with two sureties each in like sum.

They were later re-arraigned before Justice Binta Murtala-Nyako on February 3, 2012, and subsequently, before Justice Rita Ofili-Ajumogobia on January 16, 2013.

Both judges had adopted the bail terms earlier granted by Mr. Ajakaiye.

In the charge, the accused were alleged to have granted credit facilities, manipulated shares and committed general banking fraud worth over N125 billion.

The offence is said to contravene the provisions of Section 7(2) (b) of the Advanced Fee Fraud Act, 2004, and Section 15(1) of the Failed Banks (Recovery of debts) and Financial Malpractices in Banks Act, 2004.

It also contravenes the provisions of Section 516 of the Criminal Code Act, Cap C38, Laws of the Federation, 2004 as well as Section 14 (1) of the Money Laundering Prohibition Act, 2004.