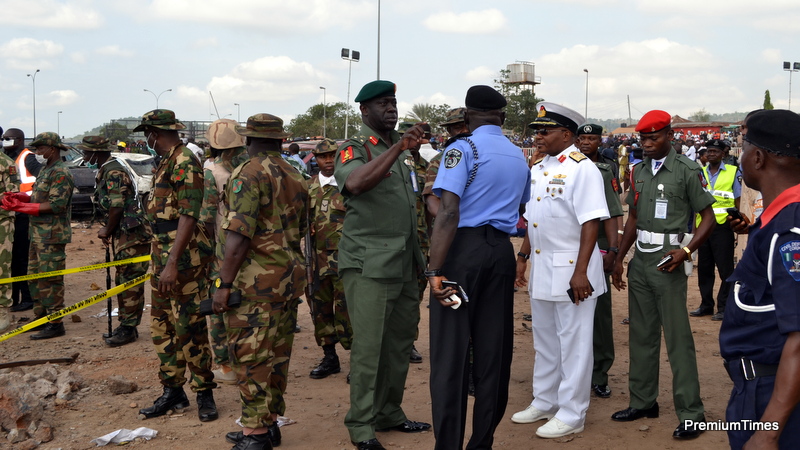 Mr.  Mba told journalists at the scene of the incident that the blast occurred at about 6.55 a.m.

Security agencies have been placed on red alert throughout the Federal Capital Territory following the explosion that occurred in Nyanya bus, stop on Monday morning, the Police Public Relations Officer, Frank Mba, has said.

Mr. Mba told journalists in Abuja at the scene of the incident that the blast occurred at about 6.55 a.m.

“The FCT police are already on red alert; security in and around Abuja is being strengthened; we are paying very close attention to all vulnerable points.

“We want to appeal for calm, cooperation and patience,’’ he said, describing the incident as sad.

Mr. Mba confirmed that 16 high-capacity buses, some cars and motorcycles were affected in the explosion.

He said investigation had begun.

“Experts from the Bomb Disposal Squad are on ground, the police are working with other security agencies.

“At this stage, we may not be able to give the casualty figure; the reasons are obvious; a lot of people are in the hospital; our detectives are visiting hospitals and taking count.

“We want to give you figures that we can back up with facts,’’ he said.

A survivor, Prince Igwe, however, said a vehicle was driven into the park and parked in front of the already loaded high capacity buses.

“The driver hurriedly parked and disappeared shortly after the explosion went off. I was inside one of the buses; I struggled to come out.

The huge explosion left a big crater at the scene of the blast.

Those affected were passengers, mostly workers leaving the park to the city centre, petty traders and vehicles conveying passengers to other locations within and outside Abuja.

Police and other security agencies as well as para-military agencies carrying out rescue operation had hectic time controlling crowd at the scene.

The police spokesperson appealed to them to leave the scene for unfettered investigation.