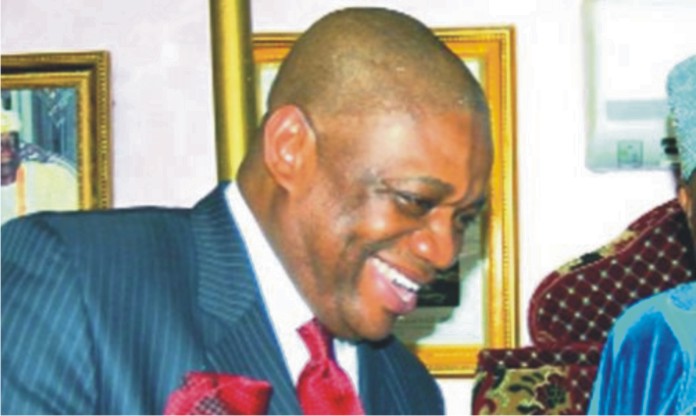 The governor says there is no need to replace both governors with PDP candidates because they have delivered on their promise.

Despite his controversial membership of the Peoples Democratic Party, PDP, a former governor of Abia State, Orji Uzor Kalu has openly thrown his weight behind the re-election of two All Progressives Congress, APC, governors.

Within one week, Mr. Kalu visited Governors Rauf Aregbesola of Osun State and Kayode Fayemi of Ekiti State during which he asked the indigenes of the states to return the governors because of their excellent performances.

The Independent National Electoral Commission, INEC, has fixed the Ekiti State governorship election for June 21 and that of Osun State for August 9.

Both governors have been adopted as candidates of the APC in both states at separate events Saturday.

Mr. Kalu’s endorsement of Mr. Aregbesola appeared particularly shocking as he did so the same day (April 5) the PDP primary election was holding in Osun State.

A former deputy governor of the state, Iyiola Omisore, emerged the governorship candidate of the PDP, beating Olasunkanmi Akinlabi, a former senator and Oluwole Oke, a former member of the House of Representatives in the contest.

While attending the 15th edition of the Walk of Love in Ipetumodu, Osun State, Mr. Kalu said though he was a friend to both Messrs Aregbesola and Omisore, there was no need to replace the governor because he had worked for the people of the state.

“I am a statesman and PDP man. I made a promise a month ago to honour this Walk to Love event,” the former governor said.

“Omisore is a personal friend of mine. Aregbesola is my friend as well. Governor Aregbesola has worked for the people of Osun. You don’t need to change a winning team. I also wish to express my support for our president, he is trying.

“There are few Governors that can walk as we have walked today, without pure water being thrown at them. If what I have seen today is a test of popularity, then Aregbesola is indeed popular. God Bless you!”

While visiting Mr. Fayemi at the governor’s official residence last Wednesday, Mr. Kalu asked the people of Ekiti State to rally round him (Fayemi) because he had delivered on the promises to them.

He said he was impressed by the diligence and commitment with which Mr. Fayemi delivered the dividends of democracy to the people and that he had got reports from the people that the governor was doing well.

The former governor said Mr. Fayemi had provided the people access to good roads, quality education and health among others, in his developmental agenda.

“Ekiti people should rally round the governor,” Mr. Kalu said. “According to what Ekiti people said, the governor has done very well. He has put in the mechanism and software for the job. Everything will not come in one day. You will start from somewhere and operate it.

“He is giving them access to good roads, access to education and health and there is no doubt that I have been impressed since I have gone through the southwest based on what I saw on ground.”

The former governor, who said he was on tour of the country to preach national unity, stated that though he was sure the PDP would battle Mr. Fayemi in the election, he was convinced the governor would win.

While describing the position of governor as a burden of service, Mr. Kalu asked all the parties in the contest to play politics with decency and honour and avoid shedding of blood in the coming elections.

According to him, all hands must be on deck to ensure the survival of the country’s democracy.

The former governor advocated a two-party system, saying that this would further strengthen democracy and give it more meaning.

Earlier, Mr. Fayemi had lauded Mr. Kalu for the patriotic step he was taking towards the sustenance of the unity of Nigeria. He said the step transcended political and religious affiliations.

He assured that he would never engage in the politics of bitterness even though people would want to take sides during elections.

He stressed that his administration would never mix politics and governance as he was committed to banishing poverty from the State.

It is not clear if the PDP will sanction Mr. Kalu for campaigning for candidates of another party as his action amounts to anti-party activity.

According to Section 58 (1) (g) of the PDP constitution, anti-party activity is a punishable offence. Section 59 also listed the sanctions to include reprimand, censure, fine, suspension, debarment from holding party office, removal from office and expulsion from the party.

The PDP spokesperson, Olisa Metuh could not be reached for comments. Repeated calls by PREMIUM TIMES to his mobile telephone lines for three days did not go through.

Mr. Kalu returned to the PDP last year in controversial circumstances after about six years of leaving the party.

Although he ruled Abia State between 1999 and 2007 on the ticket the PDP, shortly before he left office he floated the Progressives Peoples Alliance, PPA, which eventually won the governorships of Imo and Abia States in the 2007 election.

The PPA began to wane after the 2007 polls as some of its chieftains began returned to the PDP. Mr. Kalu contested the Abia North senatorial election on the platform of the PPA in 2011, but lost to Uche Chukwumerije of the PDP.

The move by the former governor to return to the PDP was initially resisted by both the Abia State chapter of the PDP and the South East zonal Chapter of the party, all of which claimed his name was not on their registers, though he had successfully registered at his Igbere Ward A.

Mr. Kalu, alongside a former governor of Enugu State, Chimaroke Nnamani were reportedly billed to be received into the PDP by President Goodluck Jonathan at the Saturday’s South East zonal rally held in Enugu. Both former governors were not present at the event.

Sanusi and the Unfinished Nigerian Story, By Marcel Ojinnaka