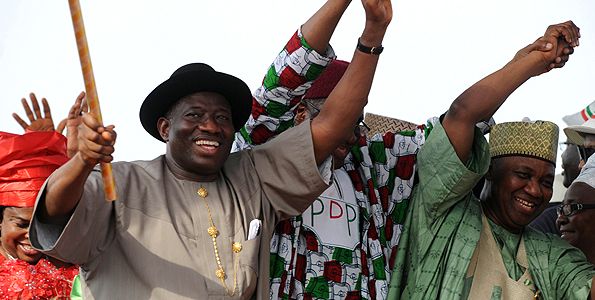 The All Progressives Congress, APC, has accused President Goodluck Jonathan and his party of engaging in crass lawlessness by their serial violation of the country’s electoral law, under the guise of liberation, family or unity rallies across the country.

In a statement issued on Sunday by its Interim National Publicity Secretary, Lai Mohammed, the party said the President has exhibited a gross abuse of executive power by leading his party to prematurely kick-start the campaign for the 2015 elections, in violation of the law.

It said if the action is anything to go by, the 2015 general elections will be everything but free, fair and credible, and called on the Independent National Electoral Commission, INEC, to assert its independence, if it has any, by sanctioning the lawbreakers since no one is above the law.

APC warns that if INEC fails to act, it loses any moral authority to stop other parties from also hitting the hustings ahead of time.

”Hiding under nomenclature, this president has led his party to engage in brazen lawlessness and shameless impunity. They have gained an undue advantage over other parties, or beaten the gun, in athletics parlance. Therefore, they should suffer the consequences of their action, the least of which is a strong public rebuke, to be followed by stipulated sanctions if they persist.

”If nothing is done to check this lawlessness, Nigerians should brace up for more in the days ahead. What example is the President laying by violating the law? What signal is he sending to Nigerians about the need to respect the laws of the land? When a President brazenly violates the electoral law under the guise of some rally, has he not started election rigging? Has he not already started compromising the electoral umpires and the security agencies?

”We know the President’s conniving handlers and advisers do not appreciate that a higher standard of conduct is expected of the President of Nigeria, through his statements, actions and body language. Unfortunately, everything points to the fact that the President, by his serial violation, is telling Nigerians and the whole world loud and clear that the coming elections will neither be free fair nor credible!” APC said.

The party said when President Jonathan boasted in Enugu on Friday, at the so-called Unity Rally, to capture the South-east in 2015, he was engaging in electioneering, rather than reunification campaign.

APC advised President Jonathan to concentrate his energy on putting Nigerians back to work, ensuring the security of lives and property and stopping the massive looting of the common wealth under his watch.

”A President who cannot even commiserate with the families of innocent school children who were violently hacked down under his watch has no qualms about skirting around the scene of the dastardly act in the name of electioneering campaign. Yet he has the temerity to point accusing fingers at others. What a cruel irony!” the party said.