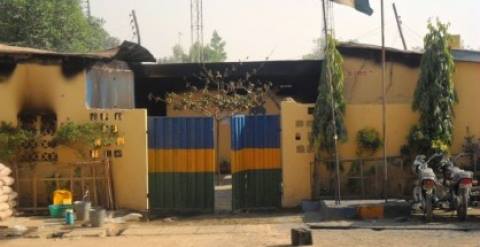 The bandits attacked a police station, a bank, and a Sharia Court.

Bandits on Wednesday attacked a police station, a bank, and a Sharia Court and killed eight people, including police officers, in Gwaram Town, Gwaram Local Government Area of Jigawa.

The Assistant Inspector General of Police, AIG, zone 1, Tambari Muhammed, said this when he spoke with journalists in Dutse.

According to him, about 200 attackers entered the town with motorcycles and cars at about 1 a.m.

The AIG described the situation as unfortunate in s state that had been enjoying peace for long.

He said the bandits used explosives to attack the bank, police station and court.

Mr. Muhammed said that no arrest has been made but more armed police officers had been deployed to the area.

The same bank was attacked in Gwaram in 2012.

Attacks by unidentified armed men in large numbers have been ongoing in several northern states. Over 100 people were killed in Zamfara on Saturday in a similar attack by men on motorcycles.

Lassa fever kills one in Jos