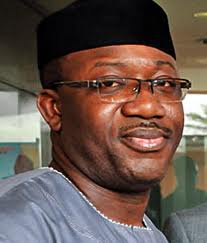 Government accused PDP of crying foul over nothing.

The Ekiti State Government has denied claims that it refused to approve the use of Ado-Ekiti Stadium for the rally of the state chapter of the People Democratic Party, PDP.

Ekiti State is governed by the All Progressives Congress, APC, whose governor, Kayode Fayemi, is also an aspirant in the governorship election. Ayo Fayose, a former governor of the state, is the candidate of the PDP, the main opposition party in the state.

The Independent National Electoral Commission, INEC, fixed the election in the state for June 21.

But on Sunday, the Director-General of the Ayo Fayose Campaign Organisation, Dipo Anisulowo, and the State PDP Publicity Secretary, Kola Oluwole, lamented at a press conference that the government denied the organization the use of the facility to conduct its rally.

They said government’s refusal informed the postponement of President Goodluck Jonathan’s one-day visit to Ekiti State on Tuesday during which he would have inaugurated the campaign organization.

“This action of the State government clearly shows the level of intolerance and unwarranted hatred for the opposition which is condemnable,” they said. “The Ekiti State Stadium belongs to the Ekiti people and not APC, the public utility is being funded with Ekiti people’s money. It is, therefore, surprising that the people of Ekiti, who are members of the opposition party, are being denied the use of the public utilities.”

However, the State Commissioner for Information, Kayode Olaosebikan, has denied the claim, saying the facility had been booked for a league match which would hold the same day the PDP wanted to use it.

He explained that when the representatives of the Ayo Fayose Campaign Organisation applied for the stadium, they were told verbally that the facility had been booked for the match and that this was followed up with a formal letter by the authorities concerned.

“I wonder why they are celebrating it,” Mr. Olaosebikan told PREMIUM TIMES in a telephone interview on Monday.

“When APC wanted to do its rally, it clashed with another event and they were asked to change their date. You know the type of governor we have. He does not discriminate based on party affiliation. The stadium is yet to be completed and so ordinarily it should be used for only sporting activities, but people are allowed to use it before it is completed. The governor is working hard to complete the pavilion.”

The Commissioner said the government couldn’t have denied the PDP the use of the stadium because it generates revenue for the state. He also said every indigene of the state was entitled to use the facility.

Mr. Olaosebikan said the PDP is free to use the stadium any time provided it would not clash with any event already billed to hold there.