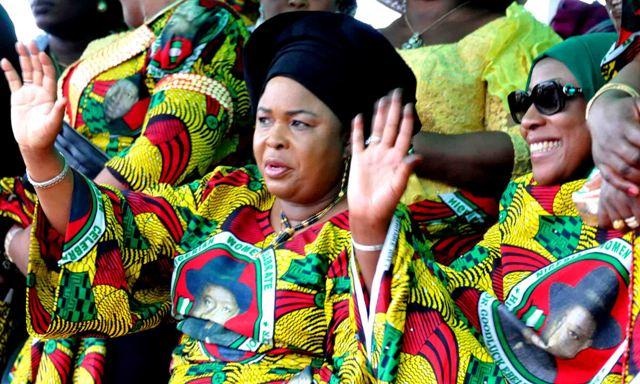 ”They are sons of the First Lady as the mother of the nation, who also has very cordial relationships with the governors in question…”

In a statement released in Abuja, Mr. Adewuyi said the president’s wife does not meddle in the affairs and selection process of the PDP.

”Our attention has been drawn to the news story in today’s Leadership newspaper, captioned ”2015: Patience Jonathan plans to install 3 Govs.”

The story, according to Mr. Adewuyi, is “insinuating that the First Lady is set to play godmother to three alleged aspiring governorship candidates in Bauchi, Bayelsa and Rivers States.

”We consider this a figment of the imagination of the writers of the spurious story.

“It is also expedient to state, clearly, that the First Lady does not meddle in the affairs and selection process of the ruling party, the Peoples Democratic Party (PDP),” he said.

Mr. Adewuyi said there is no way Mrs. Jonathan could dictate or install anybody into political office.

He added that the story was the handiwork of ”mischief makers bent on promoting bickering and animosity among people who have always been together working for the improvement of Rivers State”.

Mr. Adewuyi said the news that the first lady is positioning some other candidates to take over from the incumbents in Bayelsa and Bauchi states was an attempt to pitch them against the governors.

”Dr Waripomowei Dudafa and Sen. Bala Mohammed are loyal to the President and their governors.

”They are sons of the First Lady as the mother of the nation, who also has very cordial relationships with the governors in question and will never interfere in any process that will lead to the emergence of governorship candidates in the states.

”Mrs. Jonathan appeals to the governors of Bayelsa and Bauchi states to ignore the mischief makers who are bent on disrupting the peace prevailing in those states,” the aide said.

Mr. Adewuyi added that the first lady believed in the supremacy of the party and in democratic principles at all levels.