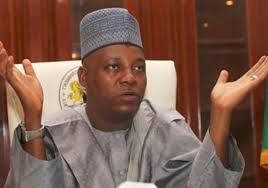 The governor said Boko Haram should not be allowed to build distrust between Nigerians and the Army.

The Governor of Borno State, Kashim Shettima, on Monday described the recent media reports linking the military with Boko Haram as “unfair, most unhealthy and unhelpful in counter insurgency operations.”

Mr. Shettima, in a message issued to journalists through his media aide, Isa Gusau, said such reports were capable of endangering the survival of Nigeria as a nation.

A voice credited to an unknown Nigeria soldier was heard on the Hausa Service broadcast of the Voice of America claiming that top military leaders were working in tandem with Boko Haram.

The unidentified soldier also alleged that a serving soldier of the Nigeria Army was amongst those killed on the side of the Boko Haram during the recent attack on Bama Town, Borno State.

Mr. Shettima in his statement said, “Of all conspiracy theories being alleged of the Boko Haram, the most dangerous, as far as I’m concerned, is to raise such grievous suspicion around our security forces. When citizens grow such suspicion and believe in it, I’m afraid, Boko Haram can light fireworks to celebrate a grand victory of setting up citizens against the security agencies.

“Since last week, I have listened and read these media reports with the hope that the issue will not be getting out of hand but it appears the matter is growing and I find it very disturbing. I do not want to bother about the credibility or otherwise of the soldier in question. I’m sure the security forces take this allegation seriously and they are investigating it as they should.”

He noted that he was not speaking for the Army but that as the Governor of the worst-hit state in the on-going conflict and one who has been working closely with security agencies, he wanted to encourage confidence building between citizens and the armed forces; “So that intelligence sharing can rise continually and we don’t lose focus in the counter insurgency,” he said.

He said that Nigerians should recognise that faced with the insurgency, the security agencies are all the country has.

“We should preserve their integrity by at least giving them the benefit of doubt. As the one working with them in Borno since 2011, I know the number of military men, police men and women as well as para-military men and women, among them commanders in the military and senior police officers, who sacrificed their lives in the fight against our unfortunate insurgency problems in Borno, which also obtains in some parts of Nigeria. Insurgents will do everything to cause confusion, to manipulate us so that we don’t trust each other as citizens and as establishments. Let’s not fall into their trap, lose focus and become their mass victims,” he said.

He disclosed that the in the past, the military had arrested, made public, and court-martialed soldiers found to be collaborating with insurgents.

“Such patriotic efforts by the military establishments should be intensified by all security agencies,” he said.
He also acknowledged the important role played by the media in the fight against the insurgents.

“The media should kindly, and very importantly too, help in fighting any suspicion that can grows between citizens and armed forces. The armed forces rely on information from citizens, the citizens rely on the armed forces for protection, this therefore means that suspicion between them will help no one but insurgents who would take advantage of such situation at the end to wreck more havoc on already traumatised citizens.

“Let us continue to pray and work for peace using whatever platforms at our disposals so that we can happily live, freely worship, associate and move around all parts of Nigeria as we should in our fundamental rights,” Mr. Shettima said.