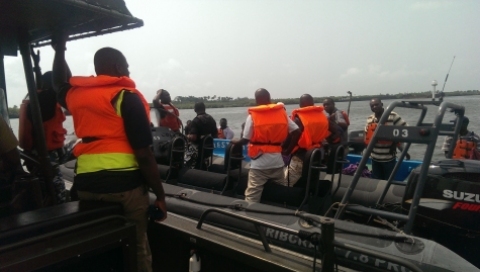 The boat capsized after hitting a rock killing eight people.

The cramming of about 25 people into a boat designed to carry 20 passengers caused the accident that led to the death of eight people, Wednesday night, some survivors have told PREMIUM TIMES.

The survivors also attributed the accident to the boat driver who was over speeding, persistently ignoring pleas from the passengers to slow down.

When the speeding boat hit a hard object which pierced it, the boat driver jumped into the lagoon and disappeared, leaving the passengers to their fate, according to Abimbola Bunmi, a survivor.

“The weight of the people inside the boat was too much for the boat. When the accident happened and we were begging the driver to put us into other passing boats, he disappeared. He knows how to swim,” said Mrs. Bunmi, who was among the 12 passengers rescued.

It was gathered that it is a common practice for passengers to crowd themselves into boats during the late evening rush hour from the island back to the mainland. It costs between N500 and N600 for a trip.

The survivor’s version of events contradicted an earlier statement issued by Bell Marine Services, the owner of the boat, which claimed that there were 20 passengers aboard the ill-fated boat.

Efforts to reach Ben Kalejaye, the General Manager of Bell Marine Services, were not successful. Phone calls and text messages were not responded to.

Several survivors who spoke to PREMIUM TIMES also debunked claims by the Lagos State Waterways Authority, LASWA, that it was a failure to use their life jackets that led to the fatalities.

Speaking to the News Agency of Nigeria, Yinka Marinho, the Managing Director of LASWA, said that the “passengers failed to fasten their life jackets properly.”

PREMIUM TIMES learnt that the ill-fated boat left Ebute Ero in Lagos Island for Majidun, Ikorodu, at about 5.34 p.m. on Wednesday.

“At the front, there was supposed to be one passenger but he (the driver) was carrying three. And he was running,” said Mrs. Bunmi, who claimed she lost about N350, 000 of her trade money in the accident.

“When the boat hit something on the ground, the boat pierced and water began to enter. After the driver disappeared, we found ourselves on top of the water for about 30 minutes. It was the fishermen that helped us. Because of the life jackets they were seeing our heads.”
PREMIUM TIMES learnt that only those who jumped out of the boat before it capsized survived, while those who stayed behind drowned with it.

Two pregnant women, a small girl, and five men died in the accident and their bodies have been deposited at the General Hospital, Ikorodu.

The National Emergency Management Agency, NEMA, said that they were informed that a couple who were to wed next weekend were aboard the capsized boat.

“Relations of a couple who were to wed next weekend have just informed us that the couple were in the ill-fated boat. The body of the wife was found in morgue while husband has not been found,” said Ibrahim Farinloye, NEMA South-West Spokesperson.

“The vehicle of the missing man, identified as Isaac Akere, is still at Bell Marine Jerry. A search for his body continues. It means the information by Mr. Ben Kalejaye that there were only 20 passengers on-board is not correct.”

Mr. Farinloye called for a retraining of boat operators on the need to be conscious of the safety of their passengers.

Wednesday’s accident occurred three weeks after a boat conveying about 24 passengers capsized in Festac Town, Lagos, killing 13, most of them hurrying to watch a European Champions League game.

Also, about a month ago, another boat capsized at Ogogoro village in Navy Town, Apapa, killing about 10 persons, including a mother and her child.

Yobo set for comeback after injury