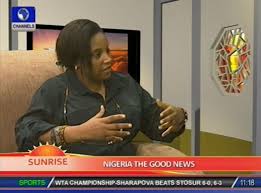 The Managing Editor of defunct NEXT newspapers, Kadaria Ahmed, will start a news and current affairs show, Wednesday, on Channels Television (channel 254 on DSTV).

The producers of the show, Reinvent Media Limited, said “Straight Talk with Kadaria”, as the programme will be called, promises “frank conversations about pressing national issues including but not limited to corruption, insecurity, politics and governance with leading national figures.”

“Based on the feedback we received for the pilot of the show, we know the programme will become one of the leading current affairs programmes in the country and will attract a large and varied audience,” said Mr. Elue of Reinvent Media.

“The show is also very timely, launching at a time when the country is facing many challenges and Nigerians are looking for answers to a myriad of serious questions,’’ he added.

Guests on the show will include politicians, policy makers, public officers, technocrats and business leaders.
The anchor, Ms. Ahmed, is an international journalist, editor, social commentator and TV personality. She moderated Nigeria’s 2011 vice-presidential and presidential debates.

Ms. Ahmed started her career in journalism with the BBC in London where she worked as a journalist/senior producer across different parts of the organization, including the newsroom and on the two flagships programmes for Africa: Focus on Africa and Network Africa.

She has reported from diverse places such as Eritrea, the United States and South Africa and interviewed notable personalities. She was also part of a select BBC team of 4 that provided annual briefings on Africa to members of the British parliament.

The 45 minutes show will be aired on Channels TV at 7.15 p.m. Nigerian time every Wednesday. It will also be available on radio and online for global audience.

Mr. Elue thanked Promasidor Nigerian Limited and Chairman of Channels TV, John Momoh for supporting the show. He also said he hoped that “Nigerians and Nigerian companies will come forward to support programmes like ‘Straight Talk with Kadaria.’