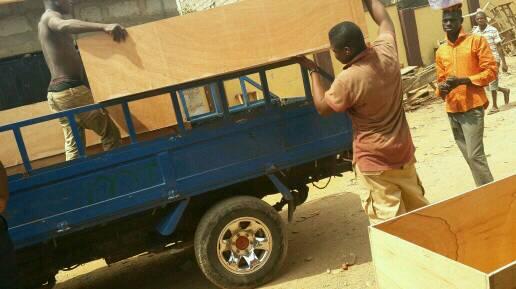 Some of the coffins protesters planned to deliver to Interior Minister, Abba Moro

Operatives of the Nigerian Security and Civil Defence Corps, [NSCDC] on Wednesday descended on protesters who were peacefully demonstrating against the death of 17 jobseekers during the Nigerian Immigration Service recruitment test on March 15.

Protesters were harassed and chased away while popular blogger, Japhet Omojuwa, and five others were arrested and whisked away in an NSCDC Hilux van.

“I got information that my client was arrested but when I got here, I realized there was no charge,” Mr. Itodo said. “ Before me, Omojuwa and Uche were beaten and called names. They were called criminals and one officer was saying ‘In this office, you don’t have human rights.’”

Mr. Itodo said the detainees were later paraded before the Commandant in charge of the FCT Command of the NSCDC, Aminu Kofarsofo, who he said expressed regret at the way Mr. Omojuwa and his colleagues were treated.

Mr. Kofarsofo, according to Mr. Itodo, however insisted that the two detainees must be moved to the SSS office to join other protesters being held there.

“As I speak to you now, they have been moved and I’m going there now,” Mr. Itodo told PREMIUM TIMES at 7.20 p.m. Wednesday.

The protesters had gathered at the Area 1 roundabout in the Garki District of the capital before marching peacefully towards the Federal Ministry of Interior located about a kilometre away to deliver 17 coffins, representing the dead applicants, to Minister Abba Moro. 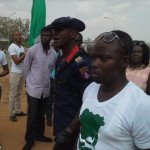 But while the protesters were waiting for the arrival of the 17 coffins, which the protesters said was made at N6, 000 each, NSCDC officials arrived in droves, ordering them to leave.

The protesters however refused and instead, waving a big Nigerian flag,  marched towards the Area 3 Bridge about one kilometre away.

But as the demonstrators were trying to cross to the other side of the road, probably heading to the interior ministry, they were again accosted by another detachment of NSCDC officials, who after a long altercation, went into a fistfight with some of the protesters.

The head of the NSCDC team, who had no name-tag and refused to give his name, claimed he had an order from above to abort the protest. 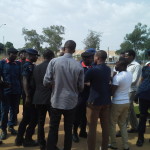 “See, I have told these people to leave this area; I got an order twice not to allow the protest. When the order came first, I ignored it, then it came the second time and now I have to obey. It wasn’t even from my Oga’. It was from someone very strong,” the NSCDC team leader said.

In a speech before he was arrested, Mr. Omojuwa had said, “We are here to protest the murder of 17 applicants, who died during the Immigration recruitment stampede.

“We are waiting for one of us, Azeernah, to deliver the coffins made for the murdered applicants, we will take them to the immigration office.”

The stampedes at various centres of the immigration service’s recruitment exercise across the country led to the death of at least 17 job seekers, including pregnant women.

An estimate showed that the Ministry of Interior made about a billion naira from the exercise, although it claimed the money was for the consultancy firm it hired for the recruitment exercise.

Although dressed in different attire than the previously announced all black dress code, some of the protesters said they were there to demand justice and put a stop to many of the impunities in Nigeria.

Another protester, Johnson Ogunmola, an engineer, said he believed that protesting was one of the only ways left for Nigerians to make things work in their country.

“We cannot keep tweeting and praying that things go right, we have to do something to make things work and I think this is one of the things we need to do,” Mr. Ogunmola said.

The National Coordinator, the Nigeria Patriot, Adeyemi Ayodeji, said his organization decided to join the protest to demand Mr. Moro’s sack, compensation for the dead and the refund of N1, 000 payments made by applicants.

At about 8.15pm however, PREMIUM TIMES receive news of the release of the arrested protesters who were asked to report to the police on Thursday.  Blogger Omojuwa told PREMIUM TIMES that “the folks at the SSS office were surprisingly civil and professional.” He said they were not bullied or manhandled as was the case with the NSCDC officials.