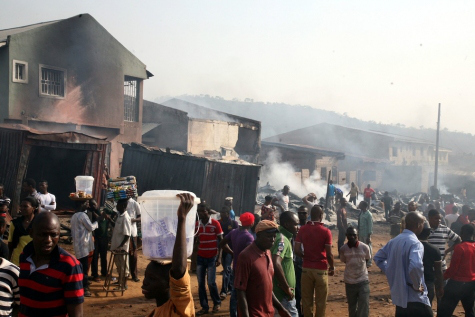 While there was no fatality, properties worth millions of naira were lost.

No fewer than 40 stalls were burnt in a fire outbreak at the Garki Model Market in Abuja on Saturday morning before the fire was put out.

Mr. Yahaya-Joe said he received a phone call and was informed that the fire started from a cold-room store before spreading to other parts.

“I received a distress call at exactly 6.02 this morning that there was fire outbreak in one of the shops with a big refrigerator and gas cylinders.

“We used fire extinguishers as an interim measure to curb the outbreak before the arrival of the fire service personnel.

“The fire fighters came from the State House, the Federal Fire Service and the FCT Fire Service.”

He said there were also other cold rooms and cylinders around the area “which aggravated the fire”.

Mr. Yahaya-Joe commended the men of the fire services for their prompt response to stop the fire.

He added that the market management would quantify the losses and guard against future occurrence.

He advised traders to discard combustible materials, gas cylinders and other inflammable materials in their shops to avoid fire outbreak.

He explained that traders were prevented from entering the market while the fire raged in a bid to prevent hoodlums from carting away valuables.

The Operational Commander, Federal Fire Service, Abuja, Ime Eyo, said that fire fighters arrived at the scene at 6.13 a.m. to put out the fire.

He said the fire was caused by a power surge, adding that about three blocks of shops were affected in the incident. He said although there were no casualties, property worth millions of naira were lost to the fire.