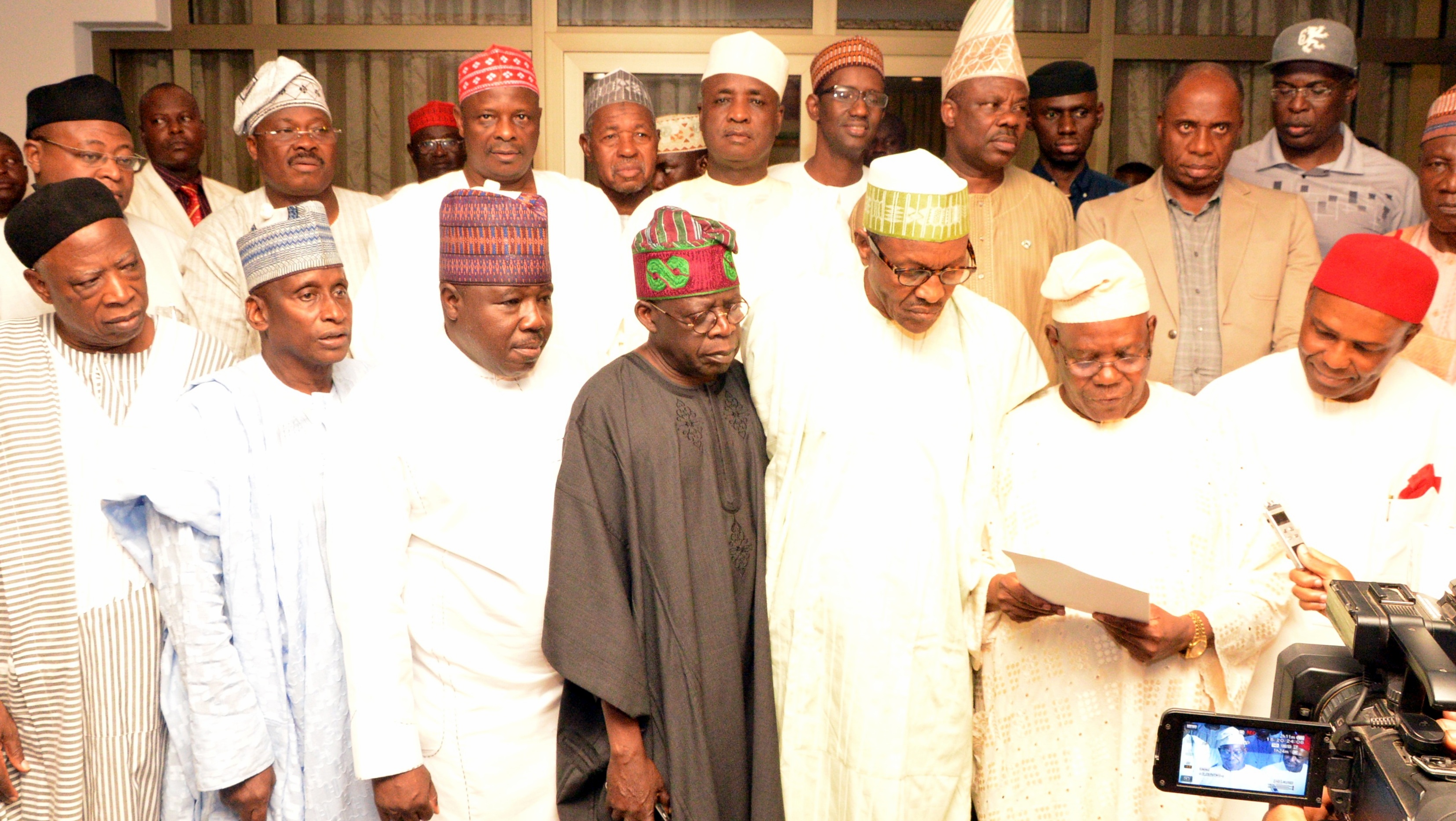 Tinubu, Sheriff in near fisticuff at APC NEC meeting

The recent meeting of the National Executive Committee, NEC, of the All Progressives Congress, APC, almost turned violent following the threat by a former governor of Borno State, Ali Modu Sheriff to beat up a national leader of the party, Bola Tinubu.

But for the intervention of the some party leaders attending the meeting, including a former Head of State, Muhammadu Buhari and a former Vice President, Atiku Abubakar, the former Borno Governor, almost made real his threat, sources at the meeting told PREMIUM TIMES.

The APC NEC meeting, which was held at the party’s headquarters in the Wuse 2 District of Abuja, was convened last Monday to discuss some pressing issues in the party, including the impending inaugural ward, local government and state congresses as well as a national convention.

Mr. Sheriff is a member of the organ in his capacity as a former governor and a leader of the defunct All Nigeria Peoples Party, ANPP, which last year merged with the Action Congress of Nigeria, ACN, Congress for Progressives Change, CPC, and a section of the All Progressives Grand Alliance, APGA, to form the APC.

He was the Chairman of the ANPP Board of Trustees until the merger. On his part, apart from being a former governor, Mr. Tinubu is a respected leading light of the country’s main opposition party.

At the end of the meeting, the APC NEC fixed May 24 for its first national convention. It also fixed April 5 for the ward congresses while the local government and state congresses will hold April 12 and 23 respectively.

Our sources said Messrs. Sheriff and Tinubu clashed when the meeting began discussions on the congresses and convention.

It was gathered that the during the discussion, the APC National Chairman, Bisi Akande, who was presiding over the meeting nominated himself and the National Secretary, Tijjani Tumsah to serve as chairman and secretary respectively of the National Convention Committee, NCC, which would also oversee the conduct of the congresses.

Angered by the suggestion, this newspaper was informed that the former Borno State Governor, who is popularly called SAS (Senator Ali Sheriff) or GAS (Governor Ali Sheriff) while in power between 2003 and 2007, grabbed the microphone and expressed his opposition to the choices.

Mr. Sheriff was also said to have made some remarks which suggested that he believed that APC was not yet mature as a party.

He was reportedly cautioned by Mr. Tinubu, who asked him not to speak about the party in a negative manner. The former Lagos State Governor also asked Mr. Sheriff to quit the APC and go elsewhere, if he was not comfortable with the party.

At this point, Mr. Sheriff, who was now holding firmly to the microphone, allegedly began to insult Mr. Tinubu, asking him if he owned the party.

“Who are you? Who do you think you are? Are you the owner of the party?” the former Borno governor reportedly inquired from Mr. Tinubu in a fit of anger.

All the leaders of the party present at the meeting reportedly watched with amazement as the 58-year old former Borno State governor reportedly rained abuses on Mr. Tinubu, 62, who on his part, kept his cool all through.

Our sources said Mr. Buhari saved the day when, sensing danger in allowing Mr. Sheriff to continue insulting Mr. Tinubu, intervened. The former head of state was said to have tongue-lashed Mr. Sheriff for losing his composure.

Attempts by PREMIUM TIMES to speak with Mr. Tinubu were not successful. His media aide, Sunday Dare could not also be reached as he did not respond to calls to his mobile telephone on Friday and Saturday.

Also, Mr. Sheriff could not be reached as he was said to have travelled out of the country on Friday morning.

A commissioner in his administration, who pleaded anonymity (saying he was not competent to speak for the former governor) said although he was not at the meeting where the two former governors exchanged verbal punches, he heard about it.

“I was not at the meeting, but I heard about it. I think it was just one of those disagreements among party members. Bola Tinubu was said to have made a remark, which didn’t go down well with Sheriff. But the matter has been resolved,” the former commissioner told PREMIUM TIMES.

No party official contacted was willing to speak on the matter. A senior member of the party, who said he was not competent to speak on behalf of the party, but who also confirmed the altercation between the two former governors to this newspaper, insisted he would not speak officially despite prodding by this reporter.

“I can’t speak on this matter. It will be against my principle and I may not be objective. Personally, I am not one to speak in a way that will portray my party in bad light,” the member said.

PREMIUM TIMES gathered that Mr. Sheriff’s action was a product of bottled-up anger over the refusal of the party to accord him a prominent place in the fold since the conclusion of the merger talks and eventual registration of the party.

The former Borno governor was said to have repeatedly position himself to play greater role given the positions he had occupied as a senator, governor and ANPP BoT chair.

Our source alleged that the former governor has always fingered Mr. Tinubu, for the “ill-treatment” and the former Lagos Governor’s remark presented a veritable opportunity to strike against him (Tinubu).

Mr. Sheriff, it was further learnt has always believed that Mr. Tinubu has not achieved politically than him as they were not only former senators, but also fellow two-time governors.

“All this is about ego. Ali Modu Sheriff believes that he was a governor just like Tinubu and both are former senators and so should not be treated in such manner,” the source told this newspaper.

Another source within the APC who is conversant with the workings of the opposition party, told this paper that Messrs. Tinubu and Buhari as well as some other key leaders are afraid that given him (Sheriff) a prominent role to play could backfire on the young party.

The source said Mr. Buhari had always been uncomfortable with Mr. Sheriff since their days in the defunct ANPP, where the former was presidential candidate twice (2003 and 2007.)

It was further gathered that some APC leaders suspect Mr. Sheriff to be a mole planted in the opposition party by the Peoples Democratic Party, PDP, perhaps due to his closeness to some senior members of the ruling party.

Besides, the role he is suspected to have played in the emergence and evolution of the extremist Boko Haram sect is  also a source of concern to some APC leaders.

The not-so-robust relationship between Mr. Sheriff and his successor, Kashim Shettima has reportedly not helped the ex-Borno Governor’s desire to play greater role in the APC.

However, in spite of all this, PREMIUM TIMES was told, some of the party’s leaders are not willing to let Mr. Sheriff turn his back on the APC as he still has some political value to bring to the merger. This, it was gathered, is majorly because of his popularity in the north eastern state of Borno.

One of our sources however argued that Mr. Tinubu has overreached himself by his disposition to some issues in the party, which, in his estimation, could affect the fortunes of the party.

“Tinubu forgets that the prefects he groomed are now principals in their own right,” the source volunteered. “Nobody will allow him to trade off this golden opportunity for the change Nigerians earnestly yearn for in 2015. He can be pardoned for what he did to Ribadu in 2011 presidential election, but not now.”

INTERVIEW: Why I will not step down for Governor Akpabio in 2015- Senator Aloysius Etok