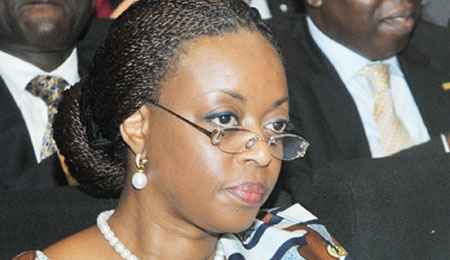 The Nigerian National Petroleum Corporation, NNPC, hastened Monday, to the defence of petroleum minister, Diezani Alison-Madueke, who is accused by federal lawmakers of squandering N10 billion to charter and maintain private for her personal use.

Ms. Alison-Madueke is accused of spending about 500,000 Euros (N130 million Naira) monthly to maintain the aircraft, solely for her personal needs and those of her immediate family.

The House of Representatives has ordered an investigation. Its public accounts committee will examine the allegation within two weeks.

The NNPC, which Ms. Alison-Madueke supervises, denied the allegation in a statement Monday, but said the corporation has the legal authorisation to own or charter an aircraft for its officials.

Such privilege is not exclusive to the minister or other officials, the NNPC said in a statement signed by its acting group general manager, group public affairs division, Omar Ibrahim.

“This practice is common and acceptable in the local and international business environment in which it operates. There is nothing prohibiting NNPC from owning or chartering an aircraft,” the statement said.

The statement said the law establishing the NNPC, empowers it to “hold, manage and alienate moveable and immovable property and enter into contracts or partnerships with any company or persons.”

Samuel Adejare, the lawmaker who raised the matter last Thursday said there was “reliable evidence” indicating that the financing for the Challenger 850 aircraft was drawn from government funds.

Mr. Adejare said the estimated N10 billion would be only “a tip of the iceberg” as detailed investigation would show the minister spent far higher.

“If government could be bankrolling this waste in the face of ever dwindling public resources,…it amounts to a misplacement of priority, impudence and breach of public trust, an action that offends the Fiscal Responsibility Act and all other Laws on fiscal discipline in Nigeria,” Mr. Adejare said.

Mrs. Alison-Madueke, who is one of the most controversial members of President Goodluck Jonathan’s cabinet, is currently at the centre of an allegation of a missing $20 billion oil proceeds raised by suspended governor of the Central Bank of Nigeria, Lamido Sanusi.

Mr. Jonathan has brushed aside repeated calls that the minister, indicted by previous investigations, be fired.

The NNPC said its operations in the oil and gas sector were time-sensitive and often required prompt attention which could not be achieved using regular scheduled flights.

Without directly stating how it has funded the minister’s chartered trips, the NNPC said it is a standard practice for large oil and gas corporations to make use of the “most efficient” means of transportation.

The statement said NNPC has always availed itself of the use of owned or chartered aircraft for the purpose of its business which include the transportation of its top functionaries.

“In this regard, it is pertinent to note that the international oil companies operating in joint ventures with NNPC, regularly charter aircraft as dictated by the exigencies of their businesses,” the corporation said.

“Indeed, some have moved from owning their own aircraft to the charter opinion. Other national oil companies, such as Sonangol of Angola, have also chosen the charter option.

“The advantages of the charter option include zero capital and maintenance costs resulting in a lower financial outlay and thus an improved cash flow,” it stated.