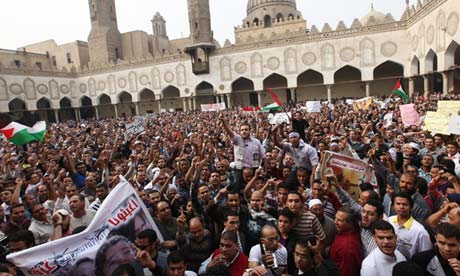 Many of the convicts were sentenced in absentia.

A court in Egypt has sentenced 529 supporters of deposed President Mohammed Morsi to death on charges of murdering a policeman and attacking police.

The upper court on Monday convicted members of the Muslim Brotherhood on charges of murdering the deputy commander of the Matay district police station in Minya during riots in the aftermath of the dispersal of the Rabaa sit-in in August.

The ruling was issued only after only two sessions. Defendants’ lawyers complained they had no chance to present their case. The court acquitted 16 other defendants.

More than 150 suspects stood trial, the others were tried in absentia.

The group are part of a larger trial involving more than 1,200 Morsi supporters.
The defendants were arrested after violent demonstrations that were a backlash for the police crackdown in August on pro-Morsi sit-ins in Cairo that killed hundreds of people.

Egyptian authorities have cracked down on Islamists since Mr. Morsi’s removal in July. Thousands have been arrested and hundreds killed, and the government has outlawed the Muslim Brotherhood.