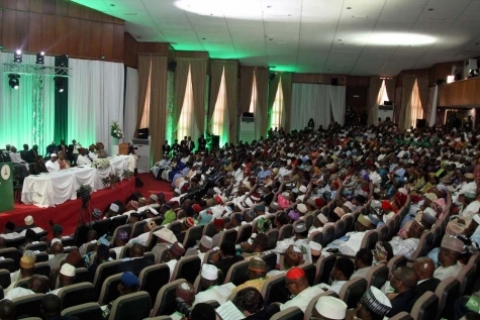 PREMIUM TIMES had exclusively reported on Friday that the delegates would get far less than the N4million a month that was speculated in the media.

The Federal Government will spend about N1.18 billion monthly, as perks to delegates to the ongoing National Conference in Abuja.

President Goodluck Jonathan had on Monday inaugurated the 492-member Conference to discuss some of the issues affecting the unity and development of the country.

The delegates, however, held their first plenary sitting on Tuesday before the Conference was adjourned till Monday.

But authoritative sources told PREMIUM TIMES that the Conference secretariat on Saturday disbursed N1.4 million to each of the 492 delegates.

A delegate, who asked not to be named so as not to be accused of divulging sensitive information to journalists, confirmed to PREMIUM TIMES that he has received an alert from his bank; confirming the payment of the allowance.

He, however, insisted that over N500 has been deducted from what the Federal Government had provided for each of the delegates.

The source said the deduction was made on the excuse that the funds would be used for tea breaks and lunches during the plenary sittings of the Conference.

He said, “We will protest any attempt to deduct anything from what was supposed to be given to us as allowances.

“We will make our feelings known to the secretariat on Monday when we resume for plenary and if they have deducted anything, we will ensure that refunds are made.”

But a senior official in the office of the Secretary to the Government of the Federation authoritatively told PREMIUM TIMES that the leadership of the Conference has not made any deduction from the perks of delegates.

The source, who is not authorized to speak on the matter, however, said that the Federal Government approved what should be paid to each of the delegates, adding that the leadership of the Conference has not acted otherwise.

He said, “The budget was done and handed over to the Conference secretariat and that’s exactly what they are implementing.

He noted that the only allowance that the delegates will receive for the entire duration of the Conference is for accommodation.

When contacted, the Assistant Secretary, Media and Communications, Akpandem James, confirmed that delegates have been paid part of their allowances for the month.

Mr. James, however, debunked claims that some deductions were made on the allowances paid to delegates, adding that what has been paid to each of the delegate will be reflected on their pay slips.

It was widely speculated that the Federal Government was going to pay a whooping N4 million as monthly allowances to each to the delegates.

But PREMIUM TIMES exclusively reported on Friday that the delegates would get far less than what was speculated in the media.